Project Batman has hit some rough patches just due to timing and general stuff happening, that and as we get further into the marathon, it is harder to find new angles to work on in terms of the movies. At this point, most people who read this site already know about the Burton twins. The Batman films that bought the Caped Crusader back to the forefront of pop culture, and eventually launched the greatest cartoon series of all-time, but another discussion.

Instead of focusing on each movie on its own, going to combine posts and deal with both movies together in various segments. So let’s get this underway.

For the first and second time, Michael Keaton takes on the mantle of the Bat in both movies. He is an interesting choice, but he makes it work in both movies. I will give his performance in Batman Returns a bit of a nudge since he is given more to work with in his relationship with Selina Kyle and actually getting to see him do stuff with his company.

On the other hand, his performance in the original Batman has a lot more standout moments. Including one of my personal favorites when he confronts the Joker in Vicki Vale’s apartment. You wanna get nuts… then let’s get nuts is an amazing scene. Still there just isn’t much else for him to do then stand around staring with the vacant look he always has. 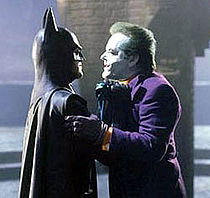 On the other end of the spectrum are the Bat-villains. A lot has been said of Jack Nicholson’s turn as The Joker. Some will argue he was just playing himself in Â make-up and not the Joker, and I will always disagree with those folks. He brings a sick but humorous take to the character. I mean its a performance so good that later movies would try and emulate his performance. He also gets the most to work with in the movie since in the original 4 movies, he is the only character who has a go at the Bat on his own.

Batman Returns does have the distinct honor of being the only one of the original 4 that did multiple villains and make it work, though some will disagree on to what extent. Danny DeVito’s turn as the Penguin was a clear deviation from well anything before and after it, he is a darker mirror version of Bruce Wayne/Batman. A child from riches who’s parents couldn’t deal with his deformities so they cast him out of their home. A bit contrived that he ends up being found and raised by penguins in Gotham sewers. I’m not even sure how penguins can raise a person in the sewers, but it works in the movie. His scheme gets muddled a bit along the way. Actually, the entire plot of Batman Returns can be described as a bit messy, but we’ll get there in a bit. Penguin’s shining moments however are 1)when he is able to remote control the Batmobile for some of the most over the top driving ever 2)Raises an army of penguins strapped with rocket launchers on their backs to attack Gotham as his plan C. 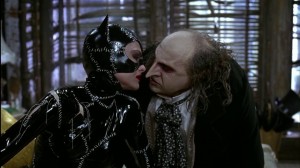 Joining him in the movie is Michelle Pfeiffer as Selina Kyle/Catwoman. She starts off the movie as a timid and unassuming executive assistant who is literally pushed too far by her boss. It is during this she undergoes a transformation into Catwoman, and is one of the best parts about the movie. I will note, and I’m sure other people share this gripe, the concept of her having 9 lives is a bit hokey, and really weakens the character, but she seems to be having so much fun doing it that it doesn’t really weaken the film. She also serves as the strongest female character in any Batman movie to date.

While the combo of Penguin and Catwoman make for a fun movie, and ultimately Max Shreck outshines both, the nod has to be given to Jack. It is still a performance andÂ portrayal of The Joker that fans remember.

What is a good or bad villain without a world-conquering scheme? This is where we break down the large-scale plans for the villains in Batman and Batman Returns. The Joker uses a variation of the joker gas plot for his turn as head foe. It has some interesting ideas like mixing his chemicals into various beauty products so it was difficult to trace the exact source and you get the wonderful shot of the news anchors not wearing any make-up. After Batman foils that plot, he decides to go big and smart. He feeds on people’s inherit greed to poison them all at once. Once more, he is stopped by Batman but for a guy dressed like a clown, it is a pretty damn good plan.

Batman Returns however, suffers from too many cooks in the kitchen. The Penguin’s motivation/goals seem to change or get sidelined throughout the course of the movie. Part of it is the introduction of Max Shreck and his own personal scheme, which again evolves throughout the course of the movie. At best I can figure, Max is trying to get Penguin elected mayor so that he can build his power plant, which would rob Gotham of essential energy. The Penguin get caught up in the plan while derailing his initial plan, which isn’t made clear until the climax. In order to get revenge on Gotham and his parents, he will kidnap all of Gotham’s first-born sons… During the actual stage of this plan, he was planning to kill them, but it makes for a very weak plot. Maybe his original intentions was simply ransom. Who knows. Like I said the plot gets very muddled along the way.

We didn’t even speak of Catwoman, and that’s because she truly lacks a motivation for most of the movie. She aligns herself with Penguin at some point to seek revenge on Batman, but that is short-lived. Then she seeks revenge on Max for pushing her out of a window, and she does get some closure with that but not much in terms of a larger scheme.

So it seems again that we will give the nod to Batman and the Joker in this category. His plan seems fairly straight-forward and his back-up is just as simple. Where as Penguin and Max’s plan intersect, but also end up going in a 3rd direction to try and make both work. It just gets messy. 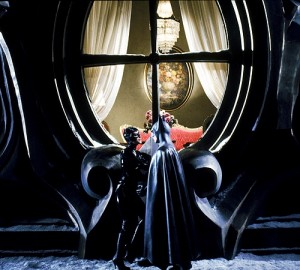 I will come out and say it, Vicki Vale is a bland character in the movie. She has very little personality and oddly enough not much of a screen presence. And to be a guy for a second she isn’t even that attractive. She walks around most of the movie with a confused or baffled look on her face which just gets old fast. And you are never really given enough reason to care for her as a character.

Michelle Pfeiffer as Catwoman however is the complete opposite of that. She commands the screen and scene when she appears. She comes from timid and frail to powerful and deadly in a believable manner. You are never quite sure if she is all there at some points of the movie. She is extremely sexy and she knows it. Using it to the best of her abilities throughout the course of the movie. Sure, she kind of lacks a proper character arc, but its just so much fun to watch her when she is on screen. There’s really no competition here!

Batman and Batman Returns both hold up well as fun, and twisted takes on the Batman universe. While I gave most of the categories to the original, I still prefer Batman Returns in my heart. There’s just something about Burton embracing his entire Burton-ness that makes it a charming and very special movie. Either way, both are worth checking out especially when compared to what comes next!