Power Rangers Dino Charge: Powers from The Past Review

Power Rangers Dino Charge represents the 22nd year that the Power Rangers franchise has been on the air. While the last few seasons have been a bit lackluster, with Megaforce and Super Megaforce being huge bummers to me for celebrations of the show’s 20th season, I had hopes for Power Rangers Dino Charge. The show had a creative shake-up and even the theme wouldn’t be a simple rehash/update of the original theme. Thankfully, Nickelodeon has put up the first episode on their app and took the time to check it out this week. From what I’ve seen, this is a much better start than the last 4 years.

Power Rangers Dino Charge, if you couldn’t tell from the name, is the 3rd Power Rangers-series to be centered on a dinosaurs motif. Unlike the previous two though, the zords seem to be actual dinosaurs infused with the power of Energems. The premiere begins with the Keeper crash-landing on Earth millions of years ago, and in order to protect his cargo, he gives the power to the greatest protectors on the Earth…dinosaurs. But in a somewhat clever moment, a ship carrying random asteroids is destroyed by an explosion creating the extinction of the dinosaurs. 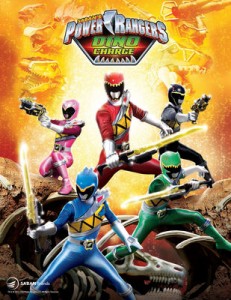 Fast-forward to the current-day and we’re introduced to a group of adventurers and archaeologist from a local museum. The cast from what little we’ve seen of them all (I think only 4 were in the pilot?) are a far step-up from the cast of Samurai and Megaforce. Especially in comparison to Megaforce, as they make no delusions of these actors being high school students. Instead, adults with jobs and careers and different ambitions. We have Shelby who works in the museum diner and has a fondness for dinosaurs. We have Tyler, who is on the quest to find out what happened to his father 10-years ago. And then there’s Chase and Koda who just seem to be there for a good time. I liked almost all the Rangers we got in this episode, though I wish their acting was better. It isn’t completely groan-inducing and it is still… Power Rangers.

There isn’t a ton of action in the first episode. It’s actually kind of curious, by the end of the episode, only two Rangers ever suit up (Red and Pink). And the others aren’t even in possession of their powers or hinted at being Rangers. The main threat isn’t really known nor are their zords. If nothing else, this only made me more eager to see the rest of the premiere just to see how everything falls into place.

I think that’s the best compliment I could pay to this episode of Power Rangers. Unlike the premiere of Megaforce, in which I said I would only be interested in watching because it was an anniversary series, Dino Charge’s Powers from the Past, makes me eager to see the rest of the series. It could all go downhill, but from here it seems very interesting.