I’m not very good at sticking to this one hour preview concept; one hour in, a lengthy game like L.A. Noire is still just getting warmed up. After 2 or 3 hours, which is about where I’m at, Rockstar’s collaboration with Team Bondi is settling in nicely and proving once again that Rockstar is one of the premier game houses in the industry. 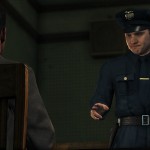 Make no mistake, I am no Rockstar fan. In fact, I have gone on record to voice my distaste for any game with “Grand Theft Auto” in the title, IV included. But, starting with Red Dead Redemption and now continued in L.A. Noire, Rockstar has proven they are simultaneously expanding their sandbox (pun intended) while continuing to hone the finer aspects of game design, particularly in presentation and narrative.

A huge portion of 1940s Los Angeles has been wonderfully brought to life in this game, and it comes through in everything from the general world, the cars, the suits, the characters, the ads, the motives…everything about the experience really nails the 1940s aesthetic. The unique setting is complimented by equally fresh gameplay that includes Rockstar staples like gunfights, chases, and vehicles, but focuses on the clue-hunting, interrogating, and logic puzzles that form the crux of the narrative. The cast has already proven to be varied and colorful in the early going, with the notable exception of the protagonist Cole Phelps, who kind of comes off as an out-of-place goody-two-shoes. However, I am inclined to let Cole’s personal story arc develop further as L.A. Noire has already hinted that his murky history from fighting in World War II may play into his character’s identity and motivations. Scattered collectibles such as newspapers are also unexpectedly fleshed out with fully-produced video sequences that show the same quality as the main story’s scenes yet tell another side story altogether that adds depth to Team Bondi’s universe. 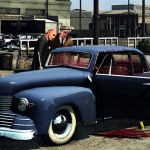 And then there’s the groundbreaking facial animation technology. Really enough cannot be said about the much-touted new feature as it adds an incredible amount of depth and tangible believability to character interaction. The strength of good acting is no longer limited to characters’ voice as the added depth of detailed facial expressions gives a new sense of tangibility and emotion to all characters. Seeing the stunningly realistic faces work so fluidly with tight cinematography and good writing is truly a wonder to beholdÂ and makes L.A. Noire the first game to truly show mastery of the visual techniques utilized in films.

In many ways, L.A. Noire is a game ahead of its time. Even just a couple hours in, the innovation and freshness in both presentation and gameplay strongly suggest that Rockstar’s latest will be one of those stand-out, generation-defining games. If you’re on the fence, cast away all reservations and dive in; you won’t regret it, especially with the deals Kmart and Amazon have going right now.