With Dragon Age II, acclaimed developer BioWare has retooled many aspects of its hit Dragon Age: Origins to fall more in line with modern expectations, especially for the horde of fans who eat up their beloved Mass Effect series. While delusionalÂ Baldur’s Gate fanatics may claim “blasphemy!” on some of the tweaks, for the rest of us, has Dragon Age II brought BioWare’s dark fantasy franchise into a form we can all enjoy? Well…it’s too early to make that call. But based on the first few hours, things are looking pretty good!

Given that Dragon Age is known as a hardcore single-player RPG that will clock in upwards of 60 hours for most players–and the fact that the demo was already an hour long–one measly hour didn’t seem to do the game justice. So, this “Power Hour” is actually based on the first 3-4 hours of the game, during which time the player is introduced to most of the trappings that will make up the full game. One of the most intriguing things about Dragon Age II is that right off the bat it tries to do something new for the game medium: it tells its story in a framed narrative. For the literary challenged among you, a framed narrative is a very common storytelling form in which the beginning and end of the story take place in the present day, while the middle part of the story consists of the “real” story, which is told reflectively. Save for Mistwalker’s Lost Odyssey, this technique hasn’t really applied to video game storytelling…until now. In practice, the technique does little to actually affect the narrative, since you still play it out in real time and make all of the decisions on your own. What the framing technique does do is give your character a certain context since you already know he will eventually be known as the Champion. This also adds an element of mystery to the game, and allows for a little narrative trick in the beginning that, from a gameplay perspective, allows the player to get a peak of some of the cooler things to come. 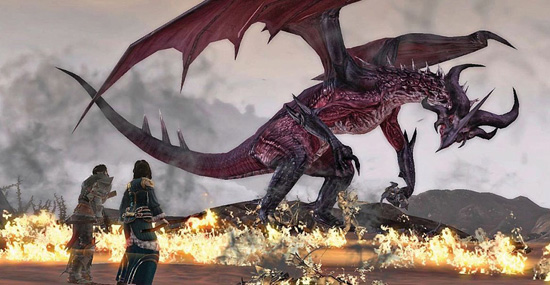 Speaking of the Champion, the player has much less control over the backstory of the protagonist. Instead picking between various classes of elf, dwarf, or human, it is already pre-determined that the protagonist is a human with the last name of Hawke, though you may select Hawke’s gender, first name, and combat class of mage, warrior, or rogue, each with their own sub-specializations, and each actually impacting how other characters interact with you, which is pretty cool. Obviously, this change means the protagonist is essentially a fantasized version of Mass Effect‘s Commander Shepard. Again, Origins fans may be disappointed, but the change actually allows for the protagonist to be fully voiced, which in turn allows for more fleshed out and entertaining interactions with other people. The added depth of how NPCs actually react to your class selection takes the Shepard idea even further, which is a nice touch. Taking another page from Mass Effect, Dragon Age II fully implements its sci-fi cousin’s radial conversation system, which further adds to the depth and fluidity of conversations, which are aplenty.

From a gameplay perspective, the pace of combat has been ramped up significantly compared to Origins, and while still very much stat-based like its RPG roots, the combat does have a certain hack-and-slash feel that is much more satisfying for gamers who enjoy more action in their games. Spells are easy to map to hotkeys, and even those which you don’t assign a shortcut to are accessible in a strategical pause menu, which makes a return from both Origins and Mass Effect and lets you issue commands to you and your teammates without the chaos around you to make things cumbersome. The combat system itself is incredibly deep; as mentioned before, each of the three primary classes have a slew of skill trees within them that essentially allow for sub-specialties (for example a damage-dealing mage versus a healer, or an area-attack warrior versus an MMO-style tank). You can also switch to controlling any of your party members at will, meaning you shouldn’t ever get bored of the class you picked for Hawke. And speaking of your squad, while it is still very early, each that I’ve met has already come across with BioWare’s signature level of polish, tight-writing, and unique characterization and problems.

Frankly, there’s not much to complain about in the early hours of the game. Combat is tight, the characters are witty, the writing is good, the already-established universe is incredibly deep, yet still welcoming to those who never touched Origins, and the graphics, while not pushing any envelopes, brings the series up to par with any other modern game out there (a welcome improvement given Origins‘ hideous PS2-era looks). If you like fantasy and what a fresh take on the genre, or you love BioWare’s style and want to see something other than Mass Effect, I highly recommend checking out this game. If you’re adverse to lengthy RPGs or are looking for another Baldur’s Gate clone… well, then Dragon Age II probably won’t change your mind, and in the latter case maybe you should just go back to 1999.

(note: this review was written with the Xbox 360 version of the game)