We ran a poll over the past week looking at what many fans consider the premiere Nintendo 64 Shooter brand, included on the list was Goldeneye, Perfect Dark and Turok. There was some debate about the inclusion of Turok on the list, and in the grand scheme of thing it really didn’t matter. 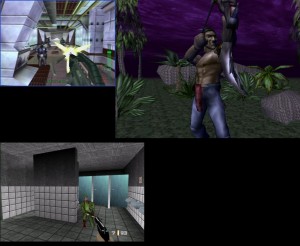 Turok was able to muster a single vote, and well I’m fairly certain it was either a pity vote or a joke vote. Who can tell with these anonymous things.

Which meant that voting really came down to Goldeneye and Perfect Dark, and the results were fairly close. Actually, a single vote separated the two of them so I guess Turok did have some sort of an impact.

Goldeneye took the win with 50% of the votes. Perfect Dark of course was a close second.

Based on our poll, Nerds on the Rocks is ready to declare Goldeneye N64 the premiere shooter on the Nintendo 64!