Hand of Fate is really unique. You sit opposite a fortune-teller who has a deck of cards. It’s a rogue-like dungeon crawler but is played through tarot cards. You see the cards face down on the table and move your character around like in a board game. Typical rogue-like elements such as a simple RPG system were there, but it was a very pretty game and was probably the most unique game at the show.

In To Leave you play as a boy hanging off of a door and fly around surreal levels. There’s essentially only one button, which you press to go up, letting go of it makes you go down. If touch anything you start the level over, with some sort of complete game over state. It’s simple, but hard, and has a beautiful hand drawn 2D art style. It seems like it focuses a lot on story, and the creators are super cool guys from Ecuador, there were a lot of games from international developers at PSX.

Rockets, Rockets, Rockets is a local multiplayer game with a really cool neon pastel arty style. You play as a rocket and your trail stays around for a while making a really cool background, especially with 4 players. You have 3 different weapon types and a shield; you can also ram other players, which brings in some strategy as the shield can be used to block a ram. It was fun, but again this is a local multiplayer game, which is a crowded genre for a fairly small market.

Militant is a side-scrolling shooter with a bug theme, a la A Bug’s Life or Antz. You also have melee abilities. It’s essentially Contra but using 3D models. The art style was a little bland and the graphics were low-res, reminding me of an Xbox OG game.

Two modes of Ninjin:Clash of Carrots were shown, the first was a side-scrolling shooter where you throw ninja stars and collect carrots. That mode was serviceable if not forgettable; however, they showed a prototype for an adventure with this really cool 3D world but with 2D building and characters. The combat for the open world mode already felt tight although there’s a long way to go on the visuals. They said they wanted it to come out in 2015 but building a Zelda style game in that time seems like a challenge.

Overall: Didn’t love the side-scrolling shooter mode, but Zelda-style mode has a lot of potential, cool and unique art style

Klaus is a 2D platformer with puzzles, like using the touch pad to rotate platforms. Story seems to be a big focus and seems well done for a platformer. It has a tremendous art style, with a conservative color palette and paper craft style. It played really well and there are multiple characters you switch between, like a big guy who can break blocks but can’t fit into small spaces.

I didn’t play Guns of Icarus Online but I did watch others play it for a while. This is a steam punk multiplayer game with slow-moving airships. I saw one player flying the gun ship and another shooting at AI ships, so there’s a co-op element to the action. It can apparently have 32 player battles, but I can’t say I was impressed with the graphics or art style.

Y2K was my first real surprise of the show and completely blew me away. It’s a turn based RPG, which is ambitious for an indie developer. In the over world you see and can avoid enemies; there’s also platforming and puzzles, which is pretty unique for an RPG. It has a cool 3D minimalist art style, which might turn some people off, but I loved it. I only played as one character but I think there’s around ten in the game. The turn-based battle system has interesting attacks, with some active components, kind of like costume quest. 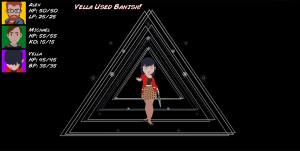 Chroma Squad is a Power Rangers simulator. You control 5 characters in fairly typical SRPG style. There are combos and apparently you can summon zords like in those shows and do battle with giant enemies. You also are in charge of the studio, and gaining popularity for your show, which honestly seemed more interesting to me. 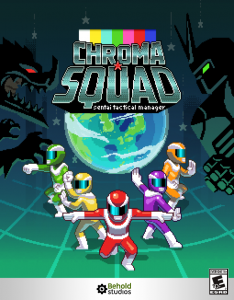 Viking Squad is a lane-based side-scrolling brawler with a Viking theme. Up to three players choose from one of four playable characters and go through a procedurally generated campaign, with the goal of getting loot and upgrading stats and gear. It has a pretty cool active reload-like mechanic to get a critical hit which prevents it from being too button mashy. It has a nice art style, played well, and the characters all play differently. It’s fun as a co-op game, but I’m not so sure how it’d hold up single player game.

Earth Night was the second big surprise of the show for me. It’s an endless runner that is so common on mobile, but has some really cool mechanics, a beautiful art style and great music. You start off by sky diving and having a behind the back, top-down look which is awesome. While sky diving, you move around to land on different colored dragons, which you run along the backs of, jumping on enemies. The gameplay felt a lot like tiny wings to me, which is a good thing. When you get to the end of the dragon you try to kill it by stabbing it in the eye, which gets you a ton of points. There are three eggs on each dragon that make it easier to kill. It may be a little simple for the PS4 but I liked having it on the big screen. There are only two different characters to play as at the moment, but they did play surprisingly differerntly. 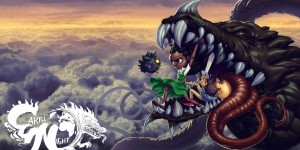 The people at the booth called Lost Orbit a dodge-em up game. It’s basically a top-down scrolling shooter without the shooting. You just avoid objects in the environment, which sounds easy, but it’s actually a lot tougher than it sounds. There’s some cool mechanics with planetoids, where you orbit them to increase your fuel for boosts, or fly through them to gain additional boost. The art style was a bit cutesy for my taste, and it played a bit sluggish but has a cool concept, not sure how it’d hold up over a whole game though.

Overall: shoot-em up without the enemies or shooting, cool gravity mechanics, main character looks like Master Chief (negative points), when you die your bones and guts fly everywhere (positive points)

Come back tomorrow for more impressions from the PlayStation Experience!