While a big publisher like Sony pulling out of PAX East casts a huge shadow over the pre-event hype, PAX offered plenty of great games to get excited for that are already released and some not too far off. I want to highlight just a few of them here with a bigger spotlight on the games I really enjoyed later.

Election Year Knockout (Developer: ExceptioNull Games, Platforms: Android/iOS, Release: Out Now) – If you’ve been having an urge for some more Punch-Out in your life, Election Year Knockout may scratch that itch a bit. Instead of cultural caricatures, the boxers you meet in the ring are caricatures of popular political candidates of 2019/2020 including AOC, Bernie Sanders and Jeb Bush with the current president serving in the Michael Tyson/Mr. Dream role. The game is currently available on Android/iOS so the version I played used the “Casual” control set-up on a tablet, which meant that the 4 regions of the screen corresponded to different punches (left, right and jab and hook), you can dodge by swiping in the direction you want to dodge and hold both sides to block/defend yourself. It all worked from my time on it, the caricatures were a bit hit-or-miss for me, and it will limit the game’s long term appeal.

Alluris (Developer: 562 Interactive, Platforms: PC, Switch, Xbox One, PS4, Android, Release: Out Now [Coming Soon to PS4 and Switch]) – When I stumbled upon the booth play Alluris, it was not at all what I expected it to be. Instead of being a fantasy RPG, it is more of a choose-your-own-adventure game with fantasy trappings. You are usually given a card that describes an encounter, an enemy a location and the choice between two options, you take your pick and see how it plays it. Rinse and repeat as you progress through towns, level up and collect loot. It’s simple, but it’s cute and works. For the right price (currently 10 bucks), it is worth checking out. 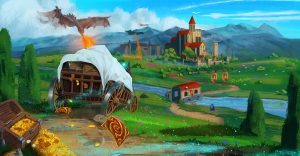 Beach Buggy Racing 2 (Developer: Vector Unit, Platforms: Switch, Xbox One, PS4, Steam, Release: Late 2020) – Beach Buggy Racing 2 is a pretty standard kart-racing experience. You select a vehicle with a variety of customization options, you pick your driver and you select a course. As you try to outrun your competitors, you pick up items to help even the field or just create some chaos. The one twist that I enjoy is when you collect items there’s a cooldown before you can use it, which helps prevent wasting it or just picking them up and spamming them. Beach Buggy is currently in Early Access on Steam and coming to consoles later this year. 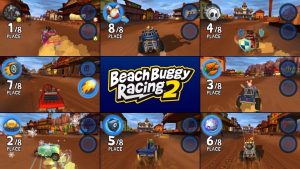 Disjunction (Developer: Ape Tribe Games, Platform: PC, Switch, Xbox One and Ps4 Release Date: Summer 2020) – Stealth is the name of the game in Disjunction as you try to unravel a giant conspiracy without triggering too many alarms, but you aren’t defenseless as you are given a host of gadgets including a stun gun and smoke grenades. The game’s narrative, from the limited exposed to, seems like it will have a ton of players and alignments to play around with so should be fun. It’s worth keeping an eye on, especially since will be dropping on console over the summer. 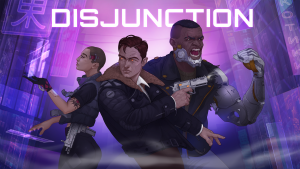 Dogfight (Developer: Petricore, Platforms: Console and PC, Release: Early 2021) – Let’s get this out of the way, Dogfight is a dogfighting game where the pilots are dogs! The game could be terrible, but the premise alone would make me interested because the doggos are so adorable! But the game has more going for it than adorable dogs, it leans into the concept. Instead of turrets or rockets, you are shooting letters or tennis balls at your opponents. The game also channels the spirit of Star Fox with it’s fun and fast-paced aerial combat and maneuverability. The game currently only has deathmatch, but the developers assured me more modes will be added before the game launches. I’m looking forward to following the game’s development and all the adorable puppy pics on their Twitter.

Lumote (Developer: Luminawesome Games, Platform: PC, Xbox One Release Date: Out Now) – Lumote is an absolutely gorgeous game, the illuminating artstyle just pops and draws your eye. Catching the game while I strolled the floor of the Boston Convention center, just lured me over to the booth like a siren and grew mesmerized as I watched others play before me. Luckily for me, the game is just as captivating to play as it is to look at. The game is a 3D platformer with puzzle elements. If you know me, I am very picky with my platformers so it comes with great joy that I found the controls tight and your character responded how you wanted them in all scenarios. In addition to that, they weave the puzzle elements into it cleverly as well. There was one minor hiccup as apparently there is a single puzzle that you can screw up so bad that have to reset some of your progress, and I managed to pull that off in the demo, go me? That said the game is out now on PC, I’ll be waiting for the console ports to add to my collection.