NYCC: What is Comic-Con?

Comic Con from San Diego to New York to Seattle are great events. There’s always so much to do and see. But one of the things that I find often-asked in various ways is “What exactly is Comic Con?”

As I prepare for the 2019 New York Comic Con, I thought it would be a great time to reflect on what the show is. And not just New York, but San Diego and many big Comic conventions.

The simplest, and maybe not always easiest to swallow, answer is that at this point “Comic Con” is a misrepresentation of what the event actually is. If anything it has gotten to be more of a pop cultural fest with a focus on not just comic books, and related media, but movies, television shows, video games and anime. 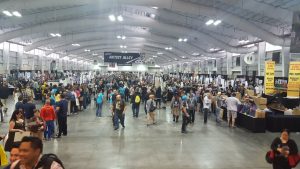 Take last year’s New York Comic Con for instance. One of the biggest panels, for me at least, were the 25th anniversary panel for Boy Meets World, which isn’t even slightly related to comic books. But the stars including Danielle Fishel (Topanga) and Ben Savage (Corey) received rock star like receptions from the audience. In years past, I’ve attended panels for movies such as Great Wall, Pacific Rim Uprising and Power Rangers. Some of those are closer to comics, but still don’t have their roots in the medium. 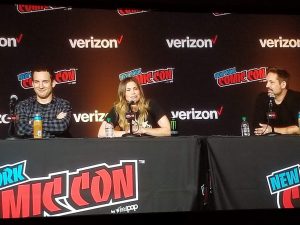 And it’s not just big entertainment either, there is a surprisingly large representation of the book industry at display. Penguin Randomhouse, Harper-Collins and Scholastic are only a handful of book companies with a presence at the show. In addition to that, there are authors signing and talks throughout the event. One of 2018’s highlights for me was getting an autographed copy of Luigi Mario’s book from John Leguizamo.

Actually, one of the best joys of the convention for me is walking the floor to see all the celebrities on hand, whether at a booth signing autographs or taking pictures or promoting their latest project. Part of the inspiration for this article was a friend asking me “What is Comic Con?” when I sent them pictures of all the various Power Rangers cast members at the event from various generations.

While Comic Con is many things, and I believe should be rebranded. I do want to make it clear that there is still a pretty healthy comic book presence at the event too. Marvel and DC still have a solid booth presence at the show. DC takes up a wing near the 34th Street entrance which houses many aspects of their company, last year had costumes from the then upcoming Aquaman movie, in years past it has had props from Batman v Superman, Wonder Woman and a few other series. It also tends to focus on some of their video games including Arkham Knight and LEGO DC Supervillains. Of course, author and book signings as well. Marvel has a booth more centrally to the trade show, and it includes everything a fan can ask for free swag, book signing, trivia and special events on the main stage and a focus on a lot of their animated fares. They also have special promotions throughout the show as well, in year’s past I’ve done a Runaways pop-up and a Cloak and Dagger off-site event. 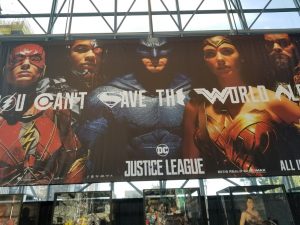 In addition to Marvel and DC, Boom is there, Image, Dark Horse and a ton of indie creators getting as much face time as they can wherever they may be tucked away. If you have never been or been before, I always recommend taking at least a few hours to thoroughly walk the show floor. I have found fantastic books and artwork that way.

Aside from booth presence though, you will get panels and specials surrounding all manners of the comic book world. Last year had a Gotham panel to celebrate the show’s final season. I had the distinct pleasure of seeing Stan Lee and Adam West in some of their final convention appearances before their passing. I always make a point to check out the latest DC Animated film panel. Like noted before Cloak and Dagger, The Runaways, Arrow, Riverdale and a host of other comic book TV shows have had massive presences. NYCC has played host to panels for the original Avengers movie and Hellboy.

Finally, it also serves as the unofficial kick-off of the Walking Dead season.

Comic Con is many things, but the one thing for sure there is something for anyone who wants to check it out!