NYCC 2014: Lara Croft and the Temple of Osiris Preview

Lara Croft and the Guardian of Light turned out to be a surprisingly fun, co-op twin-stick platformer. It took Lara Croft in a slightly new direction and allowed Square-Enix to produce two very distinct styles of Tomb Raider games.

Fast-forward a few years, and we’re finally getting a sequel. And like most sequels, the motto for this games seems to be more and bigger. 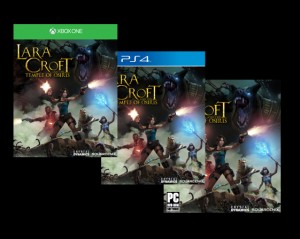 Let’s begin with more. The original game was a two-player co-op game online and off. This game doubles the count and allows 4-players to play together. Unlike the first game though, not every character is unique. Instead, there seems to be two classes, humans which is Lara Croft and a rival tomb raider and a deity class, which are the two God characters. They share abilities so Lara and her fellow hunter are able to use a grappling hook to reach faraway place or as a tightrope for other players. The deities are able to create a forcefield around themselves which can be used to block projectiles (which allows the human characters to use them as a walking shield) or can be used as a platform so characters can reach higher ledges. In addition to that, they are able to manipulate certain parts of the environment, which is needed for puzzles and navigation.

While I thought most of this was cool, I was a bit disappointed with the fact that there were really only two types of characters in the game. I get that it would probably be a pain to balance the game with 4 different classes, but really could have been fun.

On a similar note, due to the nature of the game, and because she is the titular character, when you play single player you are forced to be Lara Croft, and if you do 2-player co-op, the other player has to be one of the deity characters. So options don’t really come into play until you get at least 3-players in the game. 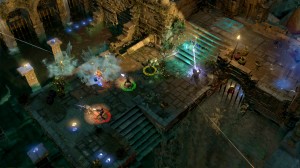 Much like the original, you are given plenty of tools to customize your character. Aside from their default weapons (humans get pistols and the deities get a magical staff), you are able to equip different types of guns (which run on a finite amount of ammo unlike default weapons) and then character coins. During the course of our demo, we were able to wield fiery weapons and these were just fun to watch as the entire screen flickered in fire and we got to burn a ton of spiders. Some change the way your weapon fires and some cause other effects. It’s going to be fun to mix and match with your friends. Especially if you can all trigger them at the same time.

Now onto the bigger. The first game wasn’t small in scale or story, but this game seems to crank it up a bit. Aside from more playable characters, there’s more enemies on screen. We got attacked by a fair amount of spiders during the course of the demo, and all manner of the undead. But where it really shined were in some boss encounters. One had us running down a corridor as the environment around us crumbled and fell. The giant dog creature chasing us the entire time. It was fun and frantic, and my group were told we were the first to make it through alive in a single attempt! (I’m sure to massage our ego) Then the demo ended with a tease of another massive boss battle. While we weren’t able to play it, it seems to be fought on a rolling rock so trying to keep your balance while doing damage. I can’t wait!

Not everything was sunshine and rainbows for this demo though, I found the controls to be a bit unwieldly at times. I felt that my character controlled rather wildly at times. It felt like they wouldn’t always move when pushing the analog stick and then other times they would just be launching across the screen at the lightest touch. I’m imagining it could simply be the demo, but it did leave a bit of concern in my head. Especially for the genre, controls need to be tight and responsive to be enjoyable.

The game looks nice, a bit dark at times, but it’s too be expected where you are hanging out and all. It it scheduled to be released on the Xbox One, PlayStation 4 and PC in December.