At New York Comic Con, I got to go hands on with Digimon All-Star Rumble, which is set to be released this fall on the PlayStation 3 and Xbox 360.

On the surface, one would be excused for believing this is a game trying to cash-in on the success of Super Smash Bros. It is a 4-player free for all fighter/brawler with an all-star cast (Though in this case all from the same franchise), but after going through some rounds the game reminds me more of Capcom’s early 2000s fighter/brawler, Power Stone, mostly for it being in 3D, and also how the power-up system work. 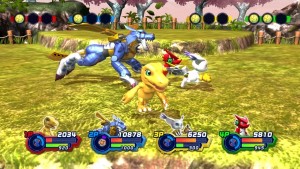 As noted, the game is played in 3 dimensions, and there was really only one stage on display on the show floor. This was a grassy area which has three descending levels, which really didn’t come into play a ton. It simply meant that characters wouldn’t be hit with most projectiles if they were on a level above or beneath the player. Also, it is interesting that every Digimon has a projectile attack, which is also assigned its own button, while it makes sense with the branding, it isn’t often that is an uniformed attack in brawlers.

In addition to their projectiles, each Digimon has a weak and heavy attack button, which can be used to craft combos. And special abilities which can be triggered with a combination of two buttons. The combo system I found to be extremely broken in this demo, and turned me off from the entire experience. While the game features a block button, it only really works when the person starts their combo. And since a combo is literally just spamming a button over and over again, characters spend most of their time either locked in a combo being beaten to death or locked in a combo beating someone to death. A counter or dodge mechanic would have gone a long way into making the game more enjoyable.

When you’re done beating on various opponents, a little meter fills up on the bottom of the screen, when it is filled, it allows you to digivole. This allows the Digimon to enter another state, makes them a larger target, but also makes them stronger and do more damage. There doesn’t seem to be a ton of negatives to it since it can sometimes knock an opponent out of an attack with their moves. There is also a special move/card system that I wasn’t quite sure how it worked. I just knew it would activate from time to time.

Perhaps, I could have gone a few more rounds, but I didn’t come away too impressed with what was on display.