At New York Comic Con this weekend, I got to go hands on with the launch built of the Izneo comic reader/subscription app coming to the Nintendo Switch in November. The app is currently available on iOS, Android devices and web browsers.

First, when Izneo launches on the Nintendo Switch it will support both handheld and docked mode for your comic reading pleasure. You’ll be able to smoothly transition from both as you’re reading your comics so if you are in the middle of a great story and need to run, don’t worry about losing your place. Downloading comics to read on the go is another option. It makes for a fairly robust set of reading options. And if you are inclined, I was informed that your reading progress carries over from app to app so you can begin reading on your tablet and make the switch to the Switch to continue on the big-screen or from the Switch to your web-browser in no time flat. 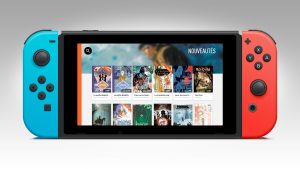 Second, Izneo features some of the best comics from around the world. There are comics from Dark Horse including “Angel & Faith,” and ” Usagi Yojimbo,” the comics of “Valerian” and so much more is available. I was told that the library will only continue to grow, and one of the reasons partnered up with Nintendo is to expand their reach and catalog beyond European comics. It is an exciting time to be sure.

Where things start to get less rosy is controlling Izneo while reading comics. Don’t get me wrong, the basic controls work, you use the analog sticks to advance pages and also zoom in and out (which can also be done with the A-button), but it seems to mess any real opportunity to take advantage of the Switch’s abilities. Something as simple as not using the shoulder buttons as ways to advance/back pages or panels seems like an odd omission especially in handheld mode where your hands tend to naturally relax. Then there’s the fact that the service doesn’t actually rotate the page to accommodate different size panels. So if you get a vertical panel, it will be fitted on the horizontal screen with a lot of empty space. It is something I am told could come in the future, but was disappointing to see. 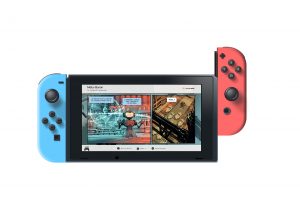 Then there’s stuff which I get isn’t needed, but surprised no real use of motion controls. Again, it’s minor in the grand scheme of things, but if you’re selling that the app can be controlled by a single Joy-con, it seems like being able to twist the controller to go forward or backward in a book would be a great addition.

On a final, somewhat completely irrelevant note, I asked about the prospect of getting older Nintendo comics and manga on the services, and it doesn’t seem to be in the cards at the moment. I mean it’s to be expected, but would have been a great ace up your sleeve as you launch on the Nintendo Switch. Speaking of, I did ask and if it does well on Switch, they will look into bringing the service to other consoles. So let’s help spread the comic joy!