When the first Mario an Sonic games were announced, fans were disappointed to see that two of gaming’s biggest icons first cross-over wasn’t some dream game, but instead an Olympic tie-in product. Now several iterations in, the Mario and Sonic games don’t generate as much excitement or controversy. 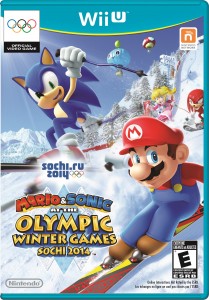 That said, Mario & Sonic at the Sochi 2014 Olympic Winter Games (is that not a mouthful?) was on display at the New York Comic Con and got to go hands on with one of the new sporting events. At the show, they were allowing fans to try out the synchronize figure-skating mini-game.

The game has two players working in tandem to play out the best routine to the song of their choice. There were several songs on display, but since this is a convention, didn’t make a difference since couldn’t hear anything! Lack of music aside, the game works by each player using their Wiimote with various gestures to mimic the on-screen actions. This includes posing, hand movement, jumps and spins.

That was Â the basic, where the game really shined was when you had to perform tandem actions with your partner. This would be done with one player extending their hand out (via the Wiimote) and the other grabbing on and pressing A on the controller letting the game know you were “holding hands.” Then, you need to time your movements together for such activities as arm-swinging, spins and tricks. The part that really stood out to me, and had a lot of fun with, are there are parts where you need to spin your partner around in a circle to complete one of the tricks. It’s a fun and short little mini-game inside of the title.

Sadly, it was the only mini-game I got to try out, but it did seem to be a ton of fun. Being the first Mario and Sonic game on the Wii U also means it looks better than the previous iterations in the series. It should be a good time for fans of the series later this year.