There is always an excitement in the air when word gets out that Nintendo is going to reveal a new Pokemon game. The problem is, not all of those games end up being mainline Pokemon titles. Such was the case earlier this year when Nintendo announced Pokemon Rumble Blast for the 3DS. A sequel to a semi-popular WiiWare game. 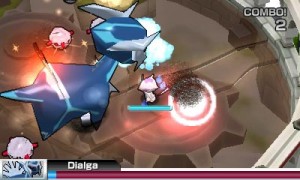 This past weekend, I had the chance to check out a final build at New York Comic Con, and I left with pretty much the same impressions I had when I tried the demo of Pokemon Rumble a few years back.

The game for those who are unfamiliar with it stars a cast of Pokemon, who are actually wind-up toys in this universe. The basic premise takes your team of Pokemon from environment to environment taking on various wild Pokemon. At the end of each stage, there is a giant Pokemon boss battles. And generally when you defeat that Pokemon, they are added to your collection.

The core mechanics of the game are fairly simple, as far as I can tell there is one attack button, but the variety comes in using various types of Pokemon since this game does take in the Rock-Paper-Scissor battle element that makes the RPG series so popular. So your team, and from what I saw at the demo, seems to be 6 Pokemon should have various elements to help you get through a stage. 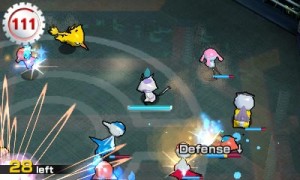 But that’s about it for the core game play. There doesn’t seem to be any type of hidden depth or RPG-elements/leveling up in the game. So there’s really not much to do.

When I walked away from the demo, I felt it was a solid beat-em up and does a fairly decent job of using the Pokemon license, but its not a full retail title. If it was like 10 bucks on the eShop, it would be a no brainer. So, I couldn’t recommend it to anyone for 40 bucks even if you were a die-hard Pokenerd.