NYCC ’11: The Adventures of TinTin

The Adventures of TinTin wasn’t a game I intended to check out at New York Comic Con, to be honest with you the game wasn’t on my radar at all. While the movie looks good, we all kind of know the reputation licensed games have.

But there was a lovely young lady (okay she was cute, and who am I to deny a pretty girl) asked me if was interested to play since the booth seemed pretty barren, I had nothing else to do so why not.

The demo shows that there is a co-op mode in this game, but since no one else was around, I tested out the two single player components of the demo. 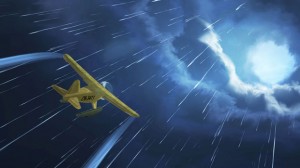 Just to get the negative out of the way, the second portion of the demo is a flight segment. I didn’t like how the plane controlled at all, it just felt really loose, and you needed some tight controls. The shooting mechanic seemed pretty weak, and kind of unnecessary. I’m fairly certain the end of the demo involves you shooting down 3 planes, I only shot down one, and it ended after some time. I must make note, as far as I can remember, the game didn’t give you any indication where the other planes were off-screen so just flying in circles until you spot someone.

On the other end of the scale is the on-foot missions with TinTin are actually pretty solid and fun, stealth/combat missions. While it isn’t Metal Gear Solid stealth, it does involve TinTin sneaking around sections of a mansion trying to evade guards and house keepers as best as possible. Though gamers aren’t really penalized for being spotted. In the demo, which admittedly is the opening area, TinTin is able to knock out most guards with a single punch even when they are focused on him.

What makes the game enjoyable, is the cartoony nature of the whole experience. Knocking out servants and the likes, allows cartoon birds or stars to float around their head. Showing you they are knocked out, not dead or anything. TinTin is able to use various objects in the environment to his advantage. One segment had him hiding in a barrel to sneak closer to a guard, while other saw him take a beach ball as his weapon of choice. And let’s just say, there is fun to be had in knocking people out with a giant beach ball.

The stealth in the game doesn’t serve to penalize the player, as I mentioned before, you can usually take out whoever spots you. But also, it comes down to hiding in vents and the likes around the mansion or being on a lower level and waiting for a patrol man to walk past before taking him out. There seems to be some context sensitive stealth elements, but the only one I saw, as said before, is hiding in the barrel to wait on an unsuspecting guard. 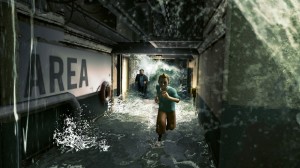 Now, while the on-foot missions sound great, I did have one issue with them, and that was some of the stage transition, which play with the camera angles can be a bit disorienting at times for the player. One segment will have you moving left to right, then you go into a segment that has you moving into and out of the camera, and need to adjust accordingly. It isn’t a game breaker, but it was slightly distracting.

The game itself looks solid. Has a nice simple look that I guess is replicating the movie. I didn’t notice anything out there, but I wouldn’t exactly pair it up against Uncharted 3 or Gears of War 3.

The Adventures of TinTin is a licensed title that knows its audience. This isn’t aiming for the super-hardcore gamer, but more for kids and families. For what it is, I found the game to be highly enjoyable, and seems like will do the movie justice. We will find out more in Dec (for the States) as the Adventure is released on Xbox 360, PlayStation 3, Nintendo Wii, Nintendo DS, Nintendo 3DS and PC.