Is this thing still on? Who knows, but we return down the nostalgia highway… well we take a minor detour. Instead of reviewing something that I’m returning to or an intro, going to take a look at something I’ve heard of in passing, but never really interacted with before on any level. 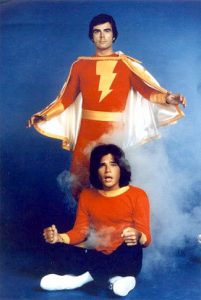 The 1970s’ Shazam! series recently made it’s way to the DC Universe service, and with a movie due in just a month’s time, I thought what better time to check out this series and what it offers. Now before, I get into the show, the only thing I knew about it was that it existed and there was two actors that played Billy and Captain Marvel, which is to be expected. Nothing else.

And boy oh boy did this show shock me, maybe not in a good way nor a bad way. First and foremost, the show is 70s as it gets. The music, the characters’ wardrobe, the environments. It makes sense, it’s not a period piece but it seems like one in hindsight.

But that happens with time what I was more shocked by was… this was an 80s cartoon in the 70s and live-action.

Starting backwards, the show literally ends with the 80s-era animated PSA with Captain Marvel delivering a message of the week. For the first episode, the message is: “It’s important to do what you know is right, and not get conned into doing something dumb just because somebody calls you names. It often takes more courage to do what’s right than to go along with the crowd.” For kids of a slightly younger demographic, this is what Animaniacs’ Wheel of Morality mocks.

The format is also closer to that of an animated series with a more traditional 30-minute runtime and more plot of the week than serialized we’re accustom to these days. I was again surprised by this, but researching after watching the first episode, apparently the show actually aired on Saturday mornings and not like primetime.

Finally, there’s the whole set-up of the series. Billy travels around in an RV with a mentor named…Mentor. I had to look that up to make sure I didn’t miss something but apparently the name is just Mentor. Billy is sometimes summoned to a realm (Not the Rock of Eternity from what I could tell) by the old gods who instill in him his mission for the week. And much like all old gods, they aren’t direct with their request. More of a puzzle for Billy to figure out and achieve. 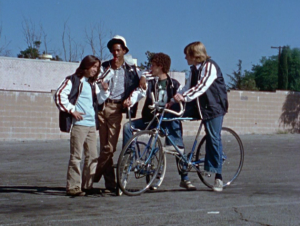 You’ll notice throughout most of this, hardly speak of Captain Marvel himself. He has a brief scene in the first episode, and could clearly tell didn’t have the budget to do much with him as the flying animation was even behind the Superman series from 2 decades prior. And his show of strength was fairly basic, but I guess didn’t need to use all his powers to set some teenagers straight.

I don’t know what my expectations for the show were, but it certainly wasn’t what I expected. I will continue to check it out because less than 30 episodes, but so strange a start.