It all began with a simple tweet from Comixology as they announced they would be streaming some of the staff playing through some comic book video games, and asking their audience what are some of their faves. Well for many people, the Batman: Arkham series is considered the pinnacle of the genre at this moment in time.

Good news, everyone! We’ll be playing some retro comic games this week on our Twitch. (https://t.co/R9ERUqMT5M.comiXology)

I worded it in my own special way, but it got me thinking about the game that started it all, Batman: Arkham Asylum, which released on the Xbox 360/PlayStation 3 and PC in the summer of 2009. It’s wild to think of such a blockbuster video game franchise launching in the summer, but that’s a topic for another day.

Instead wanted to focus on my own experience or lack of experience with the game’s release. One thing most people probably know about me is I do love me some Batman. Give me Batman in animation, on the big screen, comic books, merchandise, giant Batmobiles, you name it.

Hence it would surprise folks to know that I literally had no interest in this game before release. Until this very afternoon, I had never even seen the debut trailer for the game. And boy howdy, is it perhaps one of the worst looking trailers I’ve ever seen. Don’t believe me? Let’s gas up the Batmobile and head down the Nostalgia Highway!

Did you watch it? What does the trailer tell you about the game? Hell if you weren’t deep into Batman lore you may not have even known it was a Batman game until the end. And even then that’s only because of the title!

That’s not entirely true! Let’s break down the trailer a bit. It starts with what sounds like the free domain version of Hans Zimmer’s “The Dark Knight” theme. Then we get some shots of well… we get shots of everything. Arkham Island. Arkham Gate. The statue in front of Arkham.. Some Arkham guards. An Arkham room. You get the idea. The trailer is more of an informal tour through the facility than anything else. 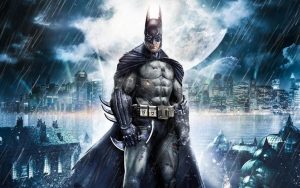 For a debut trailer, it’s weird that it ignores most of the things that the game and franchise would be known for. We hear The Joker’s laugh, but no hints of Conroy reprising his role as Batman. Even more baffling is that they don’t show Batman at all. Like I wouldn’t be surprised if folks may have thought this was a first-person game. They were all the rage back then.

But of course the most glaring omission is the lack of any actual gameplay. The Batman predator mode would be a huge part of making you feel like Batman in the game, but man that combat took the franchise to an iconic level and we get not even the slightest hint of it in this trailer.

Watching that trailer for the first time kind of contextualized why the game wasn’t on my radar at all before release. The game would be removed from the Christopher Nolan films and by an upstart company, but those are more the practical reasons. The more streamlined one was they didn’t know how to present a compelling product until it was ready to ship.

You would think I’d be disappointed that I didn’t get to board the hype train for this one, but you would be mistaken. As I love pleasant surprises and this game proved to not only be a surprise, but one of the best games, not just of that generation, but all-time.

Thanks for joining us on this bumpy road of Nostalgia.