Yesterday, the CEO of Just Add Water gamesÂ gave an interview talking about his latest project. When the interviewer asked him about the prospect of the title coming to the Wii U, he mentioned that he had no intentions to develop for a Nintendo console. His reasons was that in the past, he found it difficult to sell his products on a Nintendo console. While some may point to the questionable quality of his prior titles, the point still remains fairlyÂ relevant. It is a stigma that has been associated with Nintendo for a few years now, and one they must fight hard to overcome with the Wii U.

While there is a myriad ofÂ possibleÂ solutions for Nintendo, the central focus for these series of articles will be on how Nintendo can leverage their brand and IPs to help bolster 3rd party sales on the Wii U. Few would argue that there is any gaming company with the breadth of recognition that Nintendo has, and a cast of characters who are known around the world. We have seen in the past that it can be aÂ successfulÂ strategy as the inclusion of Link in Soul Calibur 2 propelled the GameCube release to be the best-selling version of the game.

For the first installment of this series, which we’re calling The Nintendo Difference, we will focus on the Burnout series. Why the Burnout franchise? Partially because I am a huge fan of the series, and have been dying for EA and Criterion to make a sequel to Paradise. Secondly, because I think this pairing could help both companies gain some followers from one another.

Burnout Paradise for the most part featured an assortment of licensed vehicles, but it wasn’t until later DLC when they started to include more pop-culture related cars like the DeLorean (from Back to the Future) and Ecto-1 (Ghostbusters),which opened up the game to a lot more people. This also opens the door for Nintendo, who has a surprising amount of racing franchises.

Initially, I was going to suggest that the karts from the Mario Kart franchise make an appearance since it is the best selling racing game in the industry. However, while thinking about it, the karts themselves really lack any type of personality. Up until Double Dash, each racer drove the same vehicle and the only major difference was the driver themselves. Since Â Burnout Paradise didn’t really feature any drivers, I didn’t see it fitting to include the Mario cast, which also makes the inclusion of the karts… well useless. Instead, I decided on another popular Nintendo racing franchise, F-Zero. While F-Zero has been out of the lime-light for nearly a decade, Captain Falcon has gained someÂ prominence by his appearances in the Super Smash Bros. series. Like I originally said, I see thisÂ collaborationÂ helping both companies. For Nintendo, it helps them showcase a franchise that has been dormant for the better part of 10 years. While EA/Criterion, gets some added press in the Nintendo fandom.

And as we saw in Mario Kart Wii, the Blue Falcon can easily be retrofitted to look like an actual car, though the DeLorean proved that you don’t need to have your tires on the floor to work in the Burnout universe.

In addition, if Nintendo wanted to sweeten the pot a bit, they could include tracks from the F-Zero series in the game. Who doesn’t want to go cruising down the street at 100 MPH blasting the music from Mute City or Big Blue! 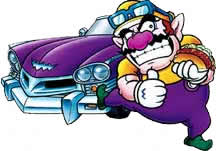 Â Finally, I would like to offer one more vehicle up for EA to use in the next Burnout title, and unlike the Blue Falcon this one fits easily since it is modeled after an actual car, but it is all the more special. Wario’s Pimpmobile (Apparently, it is called Brute, but I prefer its unofficial title) which is the car Wario can be seen cruising around in everywhere. It made its first appearance in Wario Land 4, and has been with him in every Mario Kart since then. The car looks awesome, its associated with Mario Kart andÂ aestheticallyÂ it fits in with the universe.

And that shall do it for the first installment of the Nintendo Difference. If nothing else, it is just nice to dream about the Blue Falcon and the “Brute” in the next Burnout Paradise game.