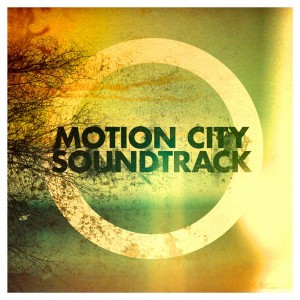 Motion City Soundtrack have had this pattern in their album releases, I’ve noticed. Discounting their first album, I Am The Movie (which was recorded and released & rereleased in fits and starts over a couple years), they’ve alternated between super pop-punk rock albums, and more relaxed pop rock albums. This pattern holds true on their newest release, Go, which is a sweet and somewhat relaxed variation on their normal themes and musical tics.

Justin Pierre, singer/guitarist and songwriter for the band, has made no bones about his struggles with mental issues and substance abuse in the past. In fact, one could say that the dynamics between his brain and relationships has been the driving force behind much of the lyrics on MCS’s releases. This newest album seems more focused on general life and mortality though. Pierre almost seems to be going through an existential crisis about the limited time we all have on earth. The lyrics of the opening track “Circuits and Wires” and latest single “Timelines” bear this out, as well as the very titles of songs such as “Everyone Will Die” and “The Worst Is Yet To Come.” If anything, the album seems a logical progression, both musically and lyrically, from one of the b-sides from their last album, My Dinosaur Life, titled “So Long Farewell.”

There’s less loud electric guitar evident, and more acoustic, and the synth is much more prominent than on the last album, which should make some of the people who complained about the lack of synth on the last few releases calm down. (Though, to be honest, the synth was always there. It’s just a matter of whether it’s mixed as the main instrument or a support part. DYNAMICS, people.) 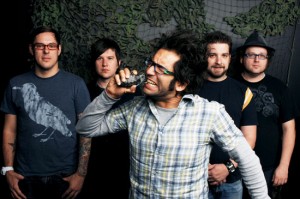 All this said, the album is very good. I wouldn’t say it’s in any danger of becoming my favorite of theirs, but it’s still a very solid and enjoyable pop rock album. Motion City Soundtrack is one of my favorite bands, and I’ll be perfectly happy if they continue putting out albums that all have slightly different sounds to them, so long as the tunefulness and lyrical poetry is there. They’re such an idiosyncratic group within their chosen milieu that you can hear a song and immediately identify that as “a Motion City song”, and I’d hate for them to become boring. Which, at this point, I can safely say is unlikely to happen.

Motion City Soundtrack GO is available now in all music stores, both physical and online, from Epitaph Records. Go to www.motioncitysoundtrack.com for more info and tour dates.