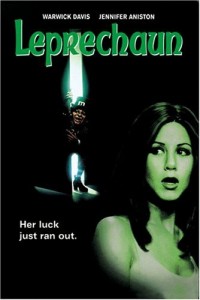 Poor Warwick Davis. After being cast to play the Ewok Wicket in Return of the Jedi at a very young age, the talented “little person” actor just couldn’t get much of a break in Hollywood. Davis did a fantastic job portraying the lead character in George Lucas and Ron Howard’s fantasy epic Willow, but the film’s box office take was disappointing, and plans for a sequel were scrapped. With few options for diminutive leading men, Davis took on the role of the titular villain in 1993’s Leprechaun, and starred in its sequels for the better part of the following decade.

The story of Leprechaun is painfully simple: 10 years ago, a man name Daniel O’Grady traveled to Ireland and stole a bag of gold from a wicked leprechaun. Upon returning to his small town American home, O’Grady is attacked by the leprechaun, who stowed away in his luggage. O’Grady manages to hide the gold and trap the leprechaun in a crate by using a four-leaf clover, which is the evil imp’s only weakness. Before he is able to finish off the leprechaun, O’Grady suffers a stroke, and the magical menace remains trapped by the magic of the clover for the next decade before being unwittingly released by an imbecilic man-child. 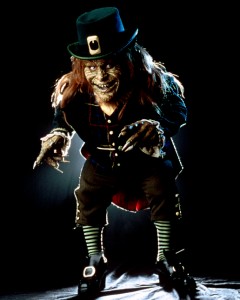 The aforementioned man-child is a house painter named Ozzie, who is working on the old O’Grady house with his Kevin Bacon lookalike friend Nathan and his kid brother Alex. The house is being rented by a man and his daughter, Tori (played by Jennifer Aniston in her film debut), an obnoxiously trendy girl from Los Angeles who immediately begins to objectify Nathan. Tori tags along with the moronic trio of painters, who follow a rainbow to the leprechaun’s hidden bag of gold. As you might expect, the leprechaun wants his gold back, and spends the rest of the movie tormenting or killing anyone who gets in his way.

As a horror story, Leprechaun is about as effective as one of R.L. Stine’s Goosebumps tales, and debatably less mature. The movie was clearly meant to be aimed at older children before scenes of gore were awkwardly inserted, earning the film an “R” rating that certainly doesn’t make it any more fun to watch. Despite having some impressive magical powers, the leprechaun spends most of the film either biting people or imitating the voice of a young girl. The film does try to mix things up: sometimes he lures someone by using the young girl voice, and then he bites them. Maybe it’s for the best that the writers kept things simplistic, as one of the few attempts at creativity resulted in a scene in which the leprechaun kills a man by repeatedly bouncing on his chest with a pogo stick. 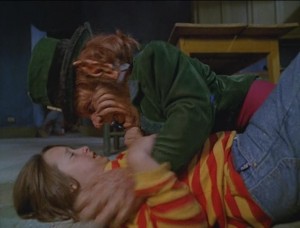 Making matters worse (or better, depending on your taste in B-movies), the fashion in this movie is horrendous – it looks like the early ‘90s threw up all over the characters’ outfits. The music is your standard stock horror movie stuff, though I’ve heard much worse. As for effects, it’s clear that most of the budget went toward the leprechaun’s makeup, which is surprisingly decent. Aside from that, the gore effects are unremarkable, and any digital effects are downright embarrassing.

I really can’t see Leprechaun appealing to anyone over the age of 12, and the filmmakers certainly tried to alienate even that demographic. It’s too knowingly bad to be fun to laugh at, and not clever enough (or at all) to laugh with. It’s a bad attempt at ripping off movies like Child’s Play, and you can’t help but feel bad for Warwick Davis for having his talent squandered so. Fortunately, Davis bounced back in recent years after partnering with Ricky Gervais on several projects, and we can only hope that his memories of the Leprechaun movies have faded away.

Review: 2 (out of 7) – If you’re looking for a scare on St. Patrick’s Day, you’re better off watching Darby O’Gill and the Little People.