Sometimes going into a movie with little knowledge of it can be of great benefits, I went into Interstellar knowing very little about the film, and found myself enjoying the ride and sense of discovery. By chance, I repeated the same thing with Jupiter Ascending. Though, I think that was because the trailers and commercials never really detailed the type of movie I was in for. Even after seeing Jupiter Ascending, I’m still not 100% sure what type of movie this wanted or attempted to be. 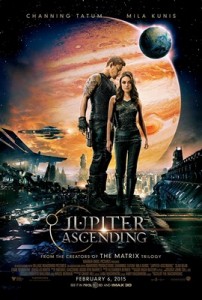 Let’s begin with the positives. This movie looks good. I just love the aesthetics that the  The Wachowskis have created for this world. The highlight being the ship designs which don’t seem man-made, which is often-time a problem with these sci-fi movies that they seem like our evolutionary path. The main fighter vehicles have a kind of organic, futuristic look to them. I love what they are able to do as well. They really steal the show during the first major action set-piece of the movie as a chase takes place throughout downtown Chicago.

While not as interesting as the ship designs, I found the aliens designs to be interesting for the most part and thematically fit in with the movie. A lot of the species seemed to be influenced by various animals from Earth. One of the races had what appeared to be an owl face, another was an bipedal elephant race, the main character is a human/wolf hybrid (not necessarily what we think of as a werewolf, but close) and an army of reptilian men round out the pretty impressive unique designs. At the same time, a lot of the other races just looked like various forms of humanoids. Though, I guess that kind of ties into the film’s various subplots about vanity. 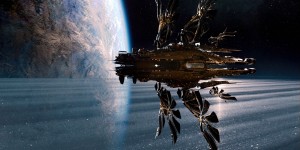 Finally, the action is thrilling.

First up, there are a pair of gravity boots that Channing Tatum’s Caine Wise wears throughout the film that makes for some dazzling setpieces. The scenes with the boots remind me of a good video game with the hero being flexible and nibble. Leaping from building to building, being pursued by fighter vehicles and even navigating an exploding planet. If nothing else, would love to see the universe of this movie expand just to see what others could do with the boot.

Not only was it a blast in chases, but they found ways to make it enhance actual hand-to-hand fight sequences. With the climax being a real test of these gravity boots, and it makes for one of the better hand-to-hand fights I’ve seen in some time.

If you only want to go to a movie for the spectacle, this isn’t a bad one to pick but boy does it fall apart after that.

The plot/story whatever is just utter bunk. Some movies get crapped on for being so decompressed that they feel like the start of another movie more than they do a standalone feature. Jupiter Ascending, on the other hand, feels like a movie that just tries to squeeze in 3-4 movies worth of development, plot and threat into 2 hours. It doesn’t work. It doesn’t make the movie feel brisk or heightened, it just makes the transition from one story to another feel half-baked.

Take for instance, the main arc of the film which features 3 siblings: Eddie Redmayne’s Balem Abrasax, Douglas Booth’s Titus Abrasax and Tuppence Middleton’s Kalique Abrasax, in the wake of their mother’s death vying over her most valuable inheritance, the planet Earth. In this film’s universe, planets are used to grow a nice, reap population so that they can be harvested to create “Regen”which is a formula that allows the wealthy to rejuvenate their cells once they become too old. Essentially, a fountain of youth created from the less-fortunate. Each has a different claim to the Earth, but our heroine, Jupiter Jones stands in their way.

Again, in this film’s world (and not entirely sure how this works) Jupiter Jones, played by Mila Kunis, is the reincarnated version of the matriarch of the Abrasax’ family. This happens so often, apparently, that she has written herself into her will which would give Jupiter the rightful ownership of the planet Earth. Twas, Balem wants to kill her to maintain his inheritance, Titus attempts to marry her to merge their property and then kill her and Kalique’s plan is never really stated outloud before she is jettisoned out of the movie.

I think any of these plots could have sustained most of a movie on its own, but doing all 3 really just gives nothing time to breathe. Kalique and Titus are introduced and dismissed just as quickly. The same thing happens with Sean Bean’s daughter, who is introduced, decides to go by groceries for dinner and disappears from the movie completely. Aside from a single passing reference to her health near the end.

Not only are characters introduced and dismissed but so are plots and subplots. Going into each would just be a pain, but stuff like Jupiter being able to control the bees is never followed up on. Nor the subplot of her selling her eggs to get money, though has a bit of a climax. Or the random rich woman who is about to be proposed to before being attacked by aliens. It’s all weird.

Oddly, the benefit doesn’t fall on the plots that remain either. The romance between Caine and Jupiter is perhaps one of the most heavy-handed and bizarre courtship I’ve seen in a movie in some times. At some point, Jupiter decides that she is in love with Caine and she isn’t close to subtle about it. Giving him a monologue about being broken because she always falls for a guy who doesn’t seem to share her feelings. At one point exclaiming, “I love dogs!” when Caine explains he has more in common with dogs than a human. There’s an awkward scene when tying back to an earlier conversation where she states “Does any part of you feel like biting me?” All of it was just cringe-worthy, and got more of a chuckle out of the audience than any sincerity in their display of emotions.

Actually based on the audience’s reactions, movie may have turned out to be an unintentional comedy. And even calling it unintentional may be off the mark. I noted before about the film’s trio of villains, and I believe their plot sounds pretty sinister and kind of demented, but their actual performance is more comical than threatening.

The villains seemingly were given a different script or direction from the directors than the rest of the movie. Not only do they ham up their performance to the point where Adam West would blush, but their emotional state all rests on them having mommy-issues. Which I guess stands in contrast to Jupiter’s daddy issues. I don’t know. It was all so very strange. 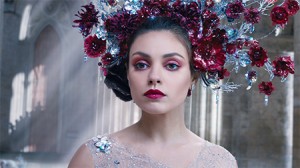 And need to touch on this ever so briefly, I get that it’s part of some grander-scheme, but one of the sons attempts to marry the reincarnated spirit of his mother. I’m sure there’s some workaround because it’s not his actual mother, but boy I can only imagine the field day, Sigmund Freud would have with this movie.

I’m sorry if my thoughts come off as a bit disjointed, it seems to match my general thoughts on this movie. It was all over the place and could never settle down and focus on being one-good thing. Or even one passable thing. Instead, you get several movies worth of contain exploding from the seams and making this mess of a film.

Review 3 (Out of7) – By the end of the journey, it felt like I was taken on an experimental rollercoaster. One that didn’t go up and down or left and right, but spun out in every which direction with no real center, and then kind of ends. Your mileage will vary, but if you go in simply for the spectacle, may enjoy yourself.