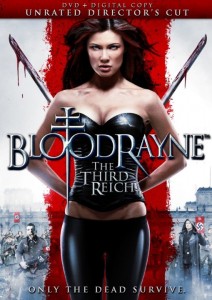 To fans and detractors alike, the Bloodrayne film trilogy is most indicative of infamous director Uwe Boll’s talent (or lack thereof). The first Bloodrayne – an adaptation of a mediocre Playstation 2 game starring a half-vampire femme fatale named Rayne – was released in 2005, before Boll’s name was synonymous with ineptitude. The film was a poorly-edited mess that, much like In the Name of the King, squandered some considerable acting talent (Why, Ben Kingsley? Why?!). The film tanked in theaters, but Boll’s shady investors ensured that a direct-to-DVD sequel would be released a couple years later.

2007’s Bloodrayne: Deliverance is strange, even for an Uwe Boll film. With a late 19th century wild west setting, the tale of Rayne’s feud with a vampire Billy the Kid strangely eschews most of the trashiness that made its predecessor a fun bad movie. The film is fairly simplistic and straightforward, and feels like a genuine attempt by Boll to prove that he can direct a film that’s not solely about gore and T&A. Sadly, the film was a bore as a result and only memorable for its casting of the kid who played Scott Farkus in A Christmas Story as the undead Billy the Kid. 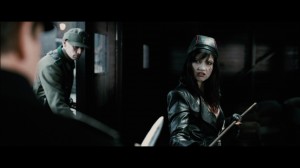 Four years later, Boll returned to the Bloodrayne franchise with Bloodrayne: The Third Reich. It only took three movies for a Bloodrayne movie to share a setting with one of the video games, with TTR focusing on Rayne assisting an underground WWII resistance group in Germany in their battle against an undead legion of Nazi soldiers. The campy premise lends itself to some ridiculous villains, such as a perverted mad scientist (Clint Howard, of course) and a sadistic commandant played by the scenery-chewing Michael Paré.

The action in TTR is fairly easy to follow and quite bloody, but repetitive and lacking in any creativity. While it’s fun to watch Rayne use her trademark blades to slice and dice her way through dozens of Nazis, it would be nice to see some practical effects that go beyond the traditional arterial spray. When Rayne isn’t fighting, she’s either arguing with her dull male counterpart or spending some quality time at the brothel. There’s more than enough skin in this film to win back anyone who was upset by Bloodrayne 2’s relative prudishness. 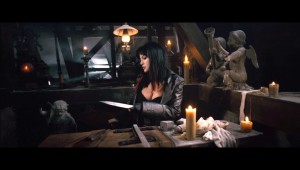 Lead actress Natassia Malthe (who I’ll always be fond of for her portrayal of Ayane in the woefully underappreciated DOA: Dead or Alive) is easy on the eyes, but comes across as a poor man’s Milla Jovovich. Her performance does fit well with the campy B-movie vibe, though, and she seems to enjoy the role. The other actors snarl and overact their way through the film with the cheesiness you would expect, and I’m just fine with that.

With TTR, Uwe Boll embraces the trashiness that helped make his early films memorable while also showing off a level of filmmaking competence that was absent in most of his previous work. This is by no means a “good” film, but it’s as good as Boll is ever going to get with a video game adaptation and generally fun to watch. You could certainly do far worse when it comes to direct-to-DVD fare.

Review: 3 (out of 7) – While a slam dunk for Boll fans, others should tread with caution. Bloodrayne 3 is trashy fun, but not for everyone.