It feels like these days there is rarely a month where there isn’t a new Kickstarter game being released. Mercenary Kings from Tribute Games is no different although it has already been available on Early Access for a while. For those not familiar with Tribute games, these are the guys behind the Scott Pilgrim game and the probably lesser known, but actually better game Wizorb. So let’s see how their newest effort stacks up.

The first thing you will notice playing Mercenary Knights are the graphics. Tribute Games has shown in their previous games already how much they love pixel art but this game is even better than their previous efforts. Usually when you think about games using pixel art they try to ape a particular moment in video game history. Like for example the upcoming Shovel Knight tries very much to look like a game that was released on the NES. Not so with Mercenary Kings, the art is very detailed and is beautifully animated. It reminds me of what we remember Neo Geo games looking like than how they actually do. 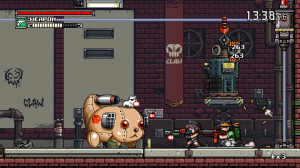 Speaking of Neo Geo, the art is also clearly influenced by Metal Slug and so is the basic gameplay. You run, jump and shoot in four directions. The additions are a roll to get out of hairy situations and a reload. The reload system in this game is similar Gears of War so if you time it right you get bullets with some bonus damage. The overall flow of the game though is not quite as frantic as Metal Slug.

So far all of this would most likely not impress most people. The clou of this game is the structure, and even in this department it borrows from another game, but maybe not one you would expect. It is one of my favorite games: Monster Hunter. From your base camp you can pick all kinds of missions that you then go out and fulfill. These can be rescue missions, sometimes you have to gather specific materials or maybe you have to defeat or capture a boss. From these missions you get the already mentioned materials and of course money. With that you can upgrade your armor, build mods that basically give you perks and of course build new guns. 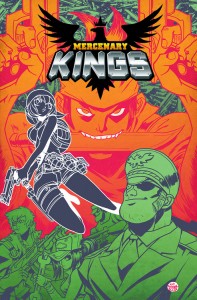 Building the guns is a lot of fun. Maybe you want to use a Magnum as a receiver and put a huge magazine on it. Sure that totally works and now you have a lot of ammo for what is basically just a very strong handgun, but there are also drawbacks. In a case like this, it would make the gun also heavier which means you move slower and your damage per shot would go down. With the different parts and ammunition types, it’s also possible to further customize your gun. These changes can affect your range, can give you different elemental effects like fire or give your shots special effects like wall penetration.

Like Monster Hunter you can go out on missions with up to three of your friends. This can be either locally or over the internet. You will most likely want to do this because if the game has one issue is that it feels somewhat grindy after a while. Mission concepts repeat, there are not that many environments to explore and even the enemies only change marginally. Since the gameplay is also basically just running, jumping and shooting it also doesn’t quite hold up mechanically over the whole length of the game. It just doesn’t evolve like in Monster Hunter where different monsters require you to change things up way more.

Verdict 5 (out of 7): Mercenary Kings is a fun game that just stretches it gameplay out a bit too much. It is one of these cases where less might have been more. If you are playing with friends it will probably bother you less. The game is still worth the asking price because before you reach that point you will most likely easily played 6-8 hours and there is still way more game to play after that if you don’t mind the grind.

This review is based on the Windows Steam release. The Mac version was still not functional at this point because of some game breaking bugs Tribute Games encountered upon release. The PS4 version is out on April 1st 2014 and will be available for free on Playstation Plus