Issue seven brings us through the halfway mark on Foundations, the thirteen-issue limited from Dark Horse. While Mac Walters is still on script and Atiyeh is on colors again, we see another change in the art team with Garry Brown taking on the pencils and ink this time. We also jump into another portion of the story, this time focusing on Jack. I am here and there on both of these decisions in their own ways. 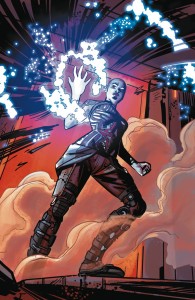 The art is, oddly, like most of the rest of the issues. Given that Atiyeh has been on colors the entire time, that helps consistency some, I’m certain. However, considering the series has been through something like six different people on art thus far, you must think they are being directed to all stick to a particular style for the sake of consistency, though given the freedom of interpretation of said style. This issue’s shadows are all super heavy, including seemingly random black splatters all over every frame. Most of the previous issues, save three and four, were also very heavy on the inks, but tended to accent in either crosshatch or streaks, so this does lend some small difference. I suppose it’s fitting, as splatters tend to be the go-to method of illustrating biotics, and this issue is about Jack, after all.

In a bit on contrast, the pencils are very sparse. Sometimes you will just get frames with two people in a hallway, drawn without, you know… faces. Clearly, this is an artistic choice, and a very minimalistic one, but I can’t say that I didn’t stop here and there and wonder, “Hmm, is there a reason that these people don’t get a nose… or eyes… actually, am I even sure which character this is?”

The colors used throughout are the very definition of binary. There are two pages with a neutral light blue/white (with random black splatter). Other than that, the rest of the pages are blue and/or red. Yes, all twenty other pages are overwhelmingly one or both of these colors and not much else. There are accents, in some places, sure. Biotic blue is accented with white, red alert is accented with some lighter oranges, but that’s really the extent of the palette. 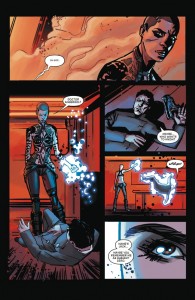 No, really, Jack is pretty upset

If you paid attention to the reasoning for the colors, you already know what I’m about to say; there is a lot of action in this issue. Fourteen of the twenty pages are action happening, and that action is generally of the shit-is-hitting-the-fan variety, juxtaposed by some minor shit-is-about-to-hit-the-fan in between. Clearly, the reason for this is because the issue revolves (mostly) around Jack, and where Jack is, shit happens.

Jack. Some people hate her, some people love her, but few fall between the extremes. Personally, I love Jack. I thought she was a great addition to ME2 and I was enamored by her no-nonsense approach to, well, most everything. That said, this issue is Jack busting all on up into a place, yelling “RAAAAAH!”, showing a brief human side, busting into an adjacent room, going “RAAAAH!” on some other people, then some new people join the fight against her, and, you guessed it, she screams “RAAAH!” against them too. When she isn’t exploding pretty much everything, she’s calling people assholes and saying “shit” a lot.

I was quite looking forward to some insight into a character I appreciated from the series, but this issue is really just a lot of unrecognizable biotic explosions and yelling. We don’t learn anything new about Jack, hell, we don’t even learn anything new about Rasa or Leng. Overall, the art is pretty underwhelming, the colors are unvarying, and the story is just a lot of things blowing up and some people dying until you reach a shockingly underwhelming conclusion to all the violence.

I think that Dark Horse has really missed out on an opportunity on this one, not only with story, but with art. The Foundation series has been all over the ME story line, loosely tied by some Cerberus links. Rather than try to keep it uniform-ish, I would have liked to see some intentionally different and extreme stylistic choices each made for Jack, Rasa, Wrex, etc. To further that, make each issue count, let us learn something new, even if it’s something small. In previous issues, we got the story straight from Ashley about Eden Prime, and I was enthralled. This issue is just Jack PG-13 cursing and making splodey. If you really, really, really love Jack or ME, I can see picking it up. Outside of that, paying four dollars on release day for a comic that is 2 colors and very little story seems like a poor decision. You can reliably skip this issue and keep on going with Foundation without missing anything of value.

It’s ME… but it’s pretty shallow ME.