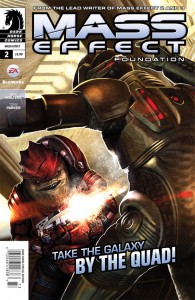 Dark Horse is releasing the second issue of Foundation this week, the new thirteen-issue series in the Mass Effect universe. Mac Walters, the lead writer for ME2 and ME3, is scripting this one again. Actually, he’s fairly regularly been scripting the majority of the ME comics that have come out, some done quite well and some rather awful. The first issue of Foundation was a bit of a twist, playing some games with who was actually going to be the protagonist in the new series. It was serious, but a bit playful, so I have been looking forward to the second issue.

The art style remains the same, which is pretty decent, as an overall. There are some dynamic frames and some great angles throughout the issue. The inks are super heavy, which isn’t my personal favorite, but they work well enough in the feel of the comic. From an art perspective, I’d say the colors caught my eye most, as Atiyeh does a solid job of using a vibrant palette, often mixing the deep blues of the Citadel in with the whites and orange of what are rather frequent explosions.

This issue offers some time with Urdnot Wrex, as he joins the story arc, competing with our protagonist(?) in a race to a target. There’s definitely some nostalgia involved in seeing Wrex up and running around (he had a pretty short run in my ME1 game, sorry Wrex), but I suppose it would be pretty hard to write a comic about the pre-Reaper invasion ME universe and not have some nostalgia. Not that nostalgia is a bad thing, but I’d definitely say we are in for a ride of many cameos. Regardless, there’s a lot going on in this issue as we pick up with Rasa, now grown up and working with Cerberus. Kai Leng is around for the majority of the issue, and serves a wonderful purpose of reminding me how much of a pain that fight was on Insanity mode. The game aside, we follow Rasa, Leng, and Wrex as the three of them execute a race over hurdles, chasing a common target, which does add a great sense of urgency to the issue. Something is always about to happen or time is always running out, which lends good pacing to the writing. There’s the typical Walters humor to be found as well, which ranges from legitimately funny to a bit pandering, but I suppose that’s sort of a staple of Walters’ humor.

It’s still very early in the arc’s run, and far too difficult to say if this will find any sort of fan acceptance into the ME universe, but so far I’m enjoying the read. This issue in particular has some great exchanges, lots of action, and plays well with some unique character dynamics as it mashes together both the old and the new. If you’re an ME fan at all, I’d say pick this up (and the previous issue, if you haven’t), because it’s definitely worth the read… so far.