Having your protagonist abducted by a small metallic orb at the end of your first season may not be a common move in superhero TV but FX’s “Legion” makes a habit of being uncommon. Helmed by “Fargo” showrunner, Noah Hawley, “Legion” takes the artistic flourishes and idiosyncrasies that defined the Coen brothers small screen adaptation and amplifies them in a world of telepaths and mutant parasites, turning a relatively unknown character into one of Marvel’s highest rated shows while being very much unlike any other Marvel show. Where the MCU builds up its interconnectivity, Season 1 had more dance numbers than X-Men references. Distinct production design, an unreliable narrator in David Haller (Dan Stevens), and genre hopping to suit the quasi-psychedelic “is this all in my head?” narrative push the show even farther away from its comic-to-TV counterparts. And for all its ambition, both in story and in visual trickery, the show manages to avoid falling into pretension or camp. There isn’t another mutant quite like David, nor is there another show in this “golden age of television” quite like “Legion”. 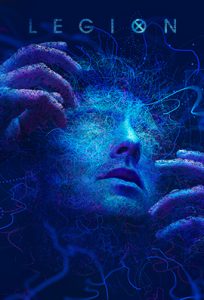 Season 2 opens with all the ambiguity that is to be expected when your lead villain has run off with a cast member and your hero has been mysteriously kidnapped. Lenny Busker (Aubrey Plaza) and Oliver Bird (Jemaine Clement) are lounging in a pool.. or are they? Various snippets follow and an enigmatic voice over a black screen welcomes us “to madness” until we are reunited with our hero – albeit in the custody of Division 3, the shadowy government group that was hunting David down last season. It appears the mutants of Summerland have fully joined forces with their former foes in order to take down the highly dangerous Shadow King. But that is only the first surprising revelation dropped on the audience in this premiere. A year has passed and David has no memory of his time in the sphere (or so he claims), the possessed Oliver has been leaving an incurable affliction dubbed “the Catalyst” (that turns people into teeth-chattering statues) in his wake, and should Amahl Farouk (aka the aforementioned Shadow King) locate his currently misplaced physical body he would be unstoppable.

These disclosures come piecemeal as returning cast and Season 2’s new additions interact with David and discuss him in private. The writing and performances in these scenes confirm that the show’s expressive visuals are not its sole merits. Syd (Rachel Keller), David’s body-swapping girlfriend, shares her despair over his abduction before their long-overdue consummation. Complementary, Melanie Bird (Jean Smart) highlights the similarities between her tortured relationship with Oliver to Syd and David’s (“After they come back, things are never the same,” she warns). Memory artist Ptonomy gives David his first face-to-face update but reveals his misgivings about David’s story to Syd. Division 3 agents Clark Debussy (who was horrifically disfigured by the mutants early in Season 1), along with the mysterious mustachioed women who accompany the basket-wearing Admiral Fukuyama (yeah.. its weird), view David with measured suspicion despite being on the same “side”. For a superhero show that lacks a single thrown punch, these weighty personality interactions are sufficiently captivating for the episode’s runtime.

But “Legion” is so much more than an hour of tense conversations (if you want endless wheel-spinning tune into “The Walking Dead”). Despite lacking traditional “BAM POW” action (at least in this opener), this season debut delivers ocular excitement via its inventive production design, the peculiar beauty of which I cant give justice to in this article. This is a show with so much flair to spare that even Division 3’s government cafeteria serves food on small boats that float along an equally small water track. This is a show where “handsome bubble“-approved actor Jon Hamm joins the cast only to be a disembodied voice narrating strange sequences that illustrate abstract concepts, such as the creation of a delusion. This is a show where those aforementioned “educational segments“, are as philosophical as they are disturbing, featuring a nightmarish baby chick and a man self-dismembering as well as meditations on the nature of reality. All this and (the debateable highlight of the episode) a threeway dance-off between David, Oliver, and Lenny. Perhaps the show’s most stunning act is its ability to pull all these disparate elements into something not just cohesive, but elevated above its peers. Where “Fargo” can switch between awful violence and black humor, “Legion” goes from mental hospital romance to silent movie horror, Bollywood to superhero fisticuffs and still remain on brand. Much like David’s powers, this is a show that can do anything and this debut shows Hawley and company have every intention of taking it even further.

Review 7 (out of 7) – Season 2’s opener packs in all the striking visual aesthetic and powerful character dynamics that defined Season 1 with a shocking twist in an episode full of surprising developments. Bigger, better, and even a bold dance number. A must-watch.