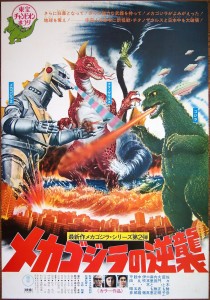 Terror of MechaGodzilla, a direct sequel to the previous year’s excellent Godzilla vs. MechaGodzilla, marks the return of the series’ most prolific director, Ishiro Honda, and is the final film in the “Showa” era of Godzilla films that lasted from 1954 through 1975. While not at all a bad film to cap off the first era of Godzilla with, it pales a bit in comparison to its direct predecessor, which feels much more inspired and energetic. It is also quite a bit darker and edgier than your average Godzilla film, with gruesome human deaths as well as some very out of place female nudity.

Picking up immediately after the ending of Godzilla vs. MechaGodzilla, the aliens from “the third planet of the black hole,” who abandon their ape-like appearance in favor of Honda-inspired silver spacewear (complete with adult toy-like helmet attachments), pursue revenge against humankind and Godzilla by coercing a stereotypical mad scientist named Dr. Mafune to create technology that would allow them to control an otherwise peaceful aquatic kaiju named Titanosaurus. The aliens’ plan is to send Titanosaurus alongside a rebuilt MechaGodzilla to attack Japan.

Under pressure from Interpol, a marine biologist named Ichinose seeks out Dr. Mafune for information regarding Titanosaurus, but is instead assisted by the doctor’s entrancing daughter, Katsura. As he works to uncover the secret behind the monster’s uncharacteristic aggressiveness, Ichinose finds himself growing closer to Katsura, who harbors a terrible secret. It is revealed through flashback that Katsura was accidentally killed during one of Dr. Mafune’s experiments and revived as a cyborg by the aliens, who use the “good” deed as leverage against her father. Katsura’s cybernetic abilities allow her to control Titanosaurus and MechaGodzilla, and the aliens manipulate her into ordering the monsters to attack Japan. 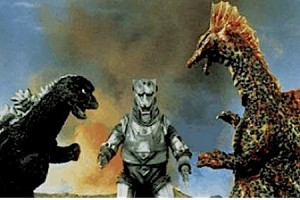 Godzilla emerges from the ocean to intercept the alien-controlled monsters, but is held at bay by MechaGodzilla’s laser beams and Titanosaurus’ ability to create hurricanes with his finned tail. Unable to get close to his enemies, Godzilla is blasted into ditch and buried in a mountain of dirt. Back with the humans, things start to get melodramatic when Ichinose pleads with Katsura to remember her humanity and spare Japan from the monsters’ wrath. Complicating matters further, Katsura’s brain is intrinsically linked to MechaGodzilla, meaning that if one were to die, the other would as well.

Finally coming to terms with her innate humanity and feelings for Ichinose, Katsura kills herself in order to render MechaGodzilla vulnerable. Interpol agents on a helicopter use a machine to distract Titanosaurus with supersonic waves, allowing Godzilla to spring out of his earthen coffin and close in on MechaGodzilla, defeating him once and for all. With the metal menace out of the way, Titanosaurus poses little challenge to Godzilla, who sends his opponent packing with a fully charged blast of his atomic breath. The film ends on a bittersweet note, with Ichinose grieving for Katsura as Godzilla triumphantly returns to the ocean. 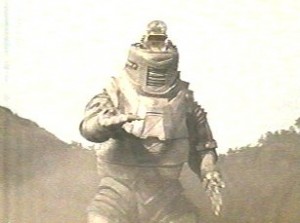 Overall, Terror of MechaGodzilla is a somewhat dour affair. There is plenty of action and mayhem once the monsters start fighting, but the entertainment is somewhat offset by the intense melodrama that lies at the heart of the film. Still, there is plenty for fans to enjoy (aside from robot boobs, you perverts!). It is undeniably fun to witness Godzilla taking on two monsters at once, and Titanosaurus makes a respectable supporting villain, even if his long neck is unable to fully support the weight of his head. Akira Ifukube’s musical score is, as always, a treat to the ears, and he incorporates some ominous organ music to accompany the scenes focusing on the tragic doctor’s follies.

A crash in Japan’s film industry in the 70s would result in the Godzilla series taking a nearly 10 year hiatus after the release of Terror of MechaGodzilla. Maybe it was for the best, as Honda’s final Godzilla film showed that there was little left to do with the heroic Godzilla who came to define the Showa era. In fact, Godzilla would not fight for the good of humanity again until 2004’s Godzilla: Final Wars.