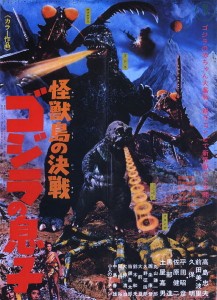 So it has come to this…

Eight movies in, the Godzilla series seemingly jumps the shark by giving the big green meanie a baby. As awful as the idea sounds, the film is nowhere near as bad as it could be, though the portrayal of Godzilla as a loving father certainly detracts from his menacing reputation. Like in ‘Ebirah,’ most of the film takes place on a tropical island, but this time the setting is used to place most of the narrative focus on the monsters that inhabit the island. The human characters consist of a freelance journalist named Maki, a group of scientific researchers (who give off a bit of a Dharma Initiative vibe), and, once again, a mysterious female native.

The researchers are conducting weather experiments on the island, but when an attempt to temporarily change the climate goes wrong, a radioactive storm is created that causes the island’s insects to grow to become gargantuan in size. Drawn by an unusual sound frequency, a group of now-monstrous praying mantises (referred to as “Kamacuras”) uncovers a giant egg from a mountainous pile of rubble.

The egg hatches to reveal an infant Godzilla-like creature (Minilla) who is immediately attacked by the Kamacuras. Before any real harm can be done to the creature, Godzilla appears and does battle with the three Kamacuras. It is revealed that the strange frequency was actually emitted telepathically by Minilla from within the egg, and Godzilla was also drawn by it. Godzilla goes into full-blown wrestling mode to easily defeat the Kamacuras, and then seemingly decides to raise Minilla as his own son.

The rest of the film alternates between scenes of Godzilla training Minilla and of the humans attempting to escape the island. Eventually, the female islander is attacked by the sole remaining Kamacuras and aided by Minilla, who inadvertently awakens the island’s most notorious monster: a giant spider named Kumonga. Minilla attempts to fight Kumonga on his own, but once again requires not-so-proud papa Godzilla to rescue him. The researchers successfully change the atmosphere to an icy climate and escape the island, and Godzilla and Minilla peacefully settle down in the snow for a period of hibernation.

While Son of Godzilla is superior to Ebirah, Horror of the Deep, it represents a trend in the Godzilla series becoming more child-oriented. The Minilla sequences are sometimes funny, often cringe-inducing, and always bizarre. The creature itself, which is clearly meant to be cute, is honestly rather unsettling looking at times. When he throws himself onto the ground, writhing around during a tantrum while making donkey-like whining sounds, it’s downright nightmarish. 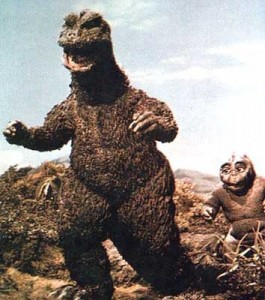 The obvious attempt to add cuteness to a Godzilla movie is also often incongruous with what is happening on screen. There’s a distinct mean-spiritedness in the way that Minilla is constantly beaten up and threatened, and even his own adoptive father occasionally gets in on the bullying. The poor little guy is thrashed by mantises, smashed with boulders, smacked around by Godzilla, and nearly eaten by a giant spider. When he runs up to Godzilla to embrace him, he is callously shoved away. I don’t know what this film says about father-son relationships in Japan, but it most certainly cannot be anything good.

So while the film has some issues, it’s also generally fun and entertaining. Jun Fukuda’s direction is more confident this time around, and he succeeds in creating a fun adventure film for the most part. The puppets used for Kamacuras and Kumonga are impressively repulsive, and the monster battles are interspersed fairly evenly throughout the film. Composer Masaru Sato redeems himself by providing some memorable music that, while overbearing at times, is memorable and catchy. The jaunty main theme has a bit of a Henry Mancini quality to it, and I found myself humming it for days.

While Son of Godzilla doesn’t completely make up for ‘Ebirah’s’ transgressions, it at least proves that the series is in capable, if not extraordinary hands. Fukuda and company would go on to make several more Godzilla films, and while they vary greatly in quality, they each have a unique tone that sets themselves apart from the films directed by Ishiro Honda.

Fun Fact: This is the only Godzilla film that does not have any scenes set in Japan

Memorable Moment: Godzilla accidentally slamming his tail into the back of his newborn son’s head