Kaiju Kommentary: The Return of Godzilla (1984) 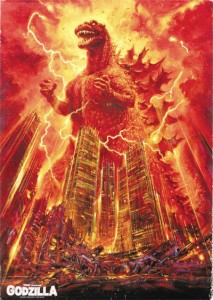 Ten years after the release ofÂ Terror of MechaGodzilla, Toho wisely decided to go back to the drawing board and reboot the series with 1984’sÂ The Return of Godzilla. While the idea of bringing Godzilla back to his villainous roots was not bad at all, the resulting film feels turgid and uninspired — especially when compared to the thought-provoking and poignantÂ Gojira.

I should get this out of the way quickly: the American cut of this film, titledÂ Godzilla 1985, just plain sucks. The folks at New World Pictures took a film already rife with exploitation of Cold War-era nuclear fears and turned it into a ham-fisted and borderline incoherent mess that mostly serves as a middle finger to the Soviet Union. In a nod to the American version ofÂ Gojira, a handful of scenes featuring Raymond Burr (reprising his role fromGodzilla: King of the Monsters) were added. These scenes add nothing to the film, and amount to Burr’s character essentially telling everyone “I told you so!” while standing in front of conveniently placed Dr Pepper vending machines. To make matters worse, a significant chunk of the original footage was removed, making the story difficult to follow. 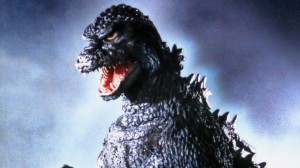 The changes to the American version might have been unwarranted, but don’t let that fool you into thinking that the unedited version is anything to celebrate. Having just seen a subtitled version of the Japanese cut for the first time recently, I can safely say that it is a completely unnecessary remake. Rather than reboot the series entirely,Â The Return of GodzillaÂ acknowledges the events of the originalÂ GojiraÂ (well, except for the part where Godzilla is skeletonized…), but then proceeds to basically tell the same story, only now with 100% more crazy Soviets.

Rather than draw any interesting parallels to the Cold War, this film prattles on endlessly about nuclear bombs, as if the series hadn’t tackled that issue far more effectively decades prior. The most interesting sequence involves a nuke-proof vehicle called the Super-X that is called in to battle Godzilla. The resulting laser light show is easily the highlight of the film, but it’s all too brief. By the time Godzilla is lured into a volcano by the sound of birds and trapped inside a prison of lava, you’ll likely be throwing your hands into the air and pining for the series’ glory days. 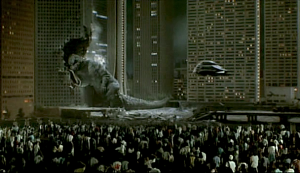 It feels like Toho missed the point of Godzilla with this film. There was tragic nobility to the Godzilla of the seminal 1954 classic; he was a creature out of place and time, unable to adapt to a world ruled by humans. The reimagined Godzilla of the 80’s is more difficult to view as a sympathetic creature as he slovenly stomps around Tokyo as if on a drunken bender, and all the swelling violins in the world can’t make an audience feel sorry for a creature that goes so far out of its way to troll humanity. Ending the film with a tacky pop song that clearly references Godzilla is further evidence of how far off the mark the tone of this film is.

The Return of GodzillaÂ isn’t a wholly terrible film, but it certainly is a slog. I can get behind the producers’ decision to portray Godzilla as a villain once again, but this film really could have used another monster for him to fight. The new Godzilla suit looks pretty good, but the effects are inconsistent, with clumsy shots of a snarling puppet-Godzilla face looking especially bad. While the Japanese cut of the film is vastly superior toÂ Godzilla1985, I can still only recommend it to the most die-hard of Godzilla fans. The series needed a reboot, but… not like this.

Fun Fact:Â An earlier draft of the screenplay had Godzilla fighting a monster named Bagan, who later appeared in the Super NES game, Super Godzilla

Memorable Moment:Â Godzilla toppling a building over to crush the Super-X