1964’s Mothra vs. Godzilla is possibly the most beloved of all the Godzilla sequels, and the last to feature Godzilla as a villain before the series’ reboot in 1984. It follows much of the formula established by King Kong vs. Godzilla, but is a slightly more serious film overall.

The film begins with a massive typhoon hitting the coast of Japan, resulting in a mysterious giant egg washing ashore. A reporter named Sakai and his photographer, Junko, attempt to uncover the egg’s origins while the greedy president of Happy Enterprises and his cohorts plan to use the egg to attract tourists to an amusement park that is being planned.

Sakai and Junko are visited by twin 6-inch tall women (played by popular Japanese singing duo, “The Peanuts”) who tell them that the egg belongs to Mothra, a sort of guardian deity to the natives of Infant Island — an island that had conveniently been used for nuclear testing. After Godzilla suddenly reappears in Japan and begins to wreak havoc, it becomes clear to Sakai and Junko that Japan’s only hope is for Mothra to aid them in defeating Godzilla.

Unlike King Kong in the previous film, who was portrayed as the lesser of two evils, Mothra (who had appeared in previous non-Godzilla Toho films) is a truly benevolent monster who fights Godzilla in order to protect innocent humans. Godzilla, on the other hand, is an enormous jerk in this film, knocking over buildings for seemingly no reason, and at one point even making a beeline toward an island that a group of schoolchildren are trapped on. In the past, Godzilla was more or less portrayed as a destructive force of nature, but in this film it is clear that he is simply a giant radioactive bully – more of a nuisance than a calamity. 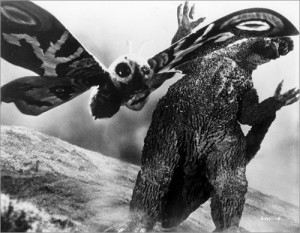 There is a bitter-sweet quality to the battle between Mothra and Godzilla, as it is explained that she is at the end of her life, devoting the last of her energy to the fight. Even so, Mothra delivers an ass-kicking to Godzilla that is so monumental that it’s no surprise that he decides to become a good guy in the next film. In particular, the shot of the relatively diminutive Mothra grabbing Godzilla by the tail and dragging him kicking and roaring is a sight that won’t be easily forgotten. And when the giant egg hatches to reveal not one, but two monstrous larvae… let’s just say you’re in for one hell of a finale.

Although previous Godzilla films had strong anti-nuclear messages, Mothra vs. Godzilla feels like the first in the series to have significant environmentalist themes. These themes would come to define a surprising number of Godzilla sequels, but are probably best handled in this one. The scenes that detail the radioactive devastation on Infant Island are surprisingly poignant, and the film is not overly preachy with its message.

This film is very enjoyable without being as outwardly goofy as King King vs. Godzilla. My only real complaints are that too much focus is placed on the greedy human villains and their convoluted schemes, and that Godzilla shows up rather late in the film. Those are minor quibbles, however, and overall this is definitely one of the best of the Godzilla sequels.