You know what they say about all good things. After redefining the series and creating four supremely entertaining Godzilla films, director Ishiro Honda decided to take a well-deserved break and hand the series’ reins to Jun Fukuda to direct 1966’s Ebirah, Horror of the Deep, known in the west as Godzilla vs. the Sea Monster. The results, sadly, turned out to be far less than stellar. 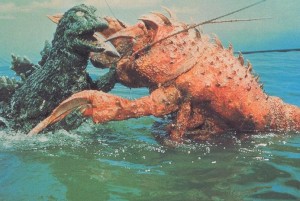 Backing away from the sci-fi themes and settings of the previous two films, ‘Ebirah’ takes place predominantly on a tropical island and features a plot heavily inspired by the 007 films that were so popular at the time. A young man named Ryota is searching for his brother Yata, who was lost at sea several months prior. After failing to win a yacht in a marathon dance contest–

Yes, you read that correctly. One of the movie’s subplots revolves around a non-stop dance marathon. As if the idea of Godzilla duking it out with a giant lobster isn’t silly enough, the filmmakers decided to force upon the audience the image of a room full of sweaty adult men convulsing on a dance floor to 60’s surf music, trying not to pass out. To make matters worse, Ryota arrives at least a day into the contest, so he’s not even eligible to win the yacht that is given as a prize to the last man dancing. What is the point of this sequence???

Ahem, so anyways, after failing to win a yacht, Ryota and his buddies (with the help of a local thief) decide to steal one so that they can explore nearby islands looking for Yata. While at sea, the group is eventually attacked by a giant lobster called Ebirah who smashes the yacht, stranding the group upon an island housing a terrorist organization named Red Bamboo.

Red Bamboo is up to all sorts of nefarious shenanigans. When they’re not hard at work producing weapons in their secret nuclear facility, they’re enslaving the villagers of nearby Infant Island (home to Mothra and the tiny twin priestesses), who are forced to gather the island’s unique fruit, used to create a chemical that can repel Ebirah. Ryota and friends discover Godzilla slumbering within a mountain and decide to use him to destroy Red Bamboo’s compound as well as fend off Ebirah, who is preventing any escape from the island. 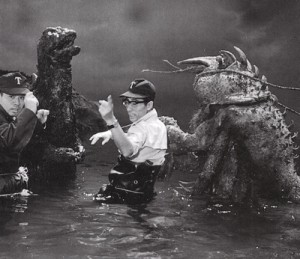 Not only is the plot unusual for a Godzilla movie, but the tone is drastically different from previous films as well. Akira Ifukube’s iconic music, which is so evocative of majestic monsters, is not used a single time during this film. Instead, a jazzy soundtrack that brings to mind 60’s surfer culture rather than kaiju battles is used to generally nauseating effect. The music gives you the impression that something is off even before the opening credits are finished.

The dissonance does not end with the music, however. After fully transitioning to a heroic role over the course of the last two films, Godzilla reverts to a dumb, rampaging beast – even attacking Mothra upon sight when she appears (after taking her sweet time!) to rescue a group of humans. Interestingly enough, the screenplay was meant for a film starring King Kong, but when Toho was unable to secure the rights to the character, Kong was replaced by Godzilla. Scenes like the one in which Godzilla protects a native woman from an overgrown condor make much more sense with this knowledge in mind.

While the tropical island setting is a refreshing change of pace for the series, the schizophrenic mishmash of elements that makes up the majority of the film add up to result in one of the weaker entries overall. Ebirah is a literally and figuratively toothless villain who, aside from being a plot device, hardly warrants any mention as a villainous kaiju. Frankly, the film is a bit of a dud, but the series would soon prove that it still had some surprises in store for fans.

Fun Fact: This was meant to be a King Kong film, which explains why Godzilla acts so differently

Memorable Moment: Ebirah using his claw to gruesomely impale two men who are trying to escape the island