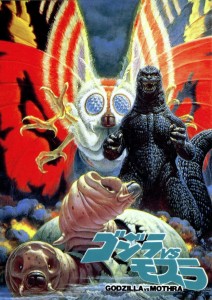 1992’s Godzilla vs. Mothra continues the trend of reimagining Godzilla’s most memorable conflicts, this time focusing on his encounter with Mothra, the benevolent winged kaiju. The opening scene is a sort of tribute to 1964’s Mothra vs. Godzilla, showing a terrible storm that uncovers a giant egg buried on an island. This is no simple retread of the Showa-era classic, though — a fact that is bluntly made apparent in the subsequent scene, which is straight out of an Indiana Jones film.

The Indiana Jones-inspired sequence introduces our protagonist, Takuya, a ne’er-do-well and would-be relic thief. Facing a long stint in prison for attempted thievery, Takuya is coerced by his ex-wife Masako and the Prime Minister of Japan to lead an expedition of Infant Island. The Japanese government has plans to develop the island and wants Takuya to investigate the effects of meteorite that crashed in its vicinity. Why the government thinks hiring a self-centered deadbeat like Takuya is a good idea is beyond me, but it means that we get to look forward to ex-spouses bickering throughout the remainder of the movie. Yay!

While exploring Infant Island, Takuya and Masako discover the colossal egg from the opening scene, as well as a mysterious cave painting of two monstrous insects fight each other. The explorers are then greeted by a pair of tiny twin women who introduce themselves as the “Cosmos.”

The Cosmos explain the story behind the cave painting, which depicts the ancient battle between Earth’s guardian monster, Mothra, and her more cynical counterpart, Battra, whose sole purpose is to destroy humanity when Earth’s environment is threatened. The two last fought after an ancient civilization with advanced technology attempted to permanently alter the planet’s climate. Mothra defeated Battra in that conflict, but not before the offending civilization was utterly destroyed. 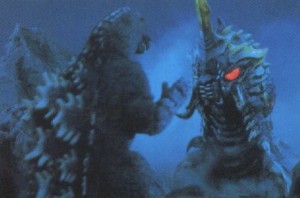 The Cosmos fear that the unearthing of Mothra’s egg means that Battra will return as well, but they also face a bigger problem: Godzilla, who was awakened by the aforementioned meteorite. Godzilla attacks the barge that is transporting Mothra’s egg to Japan, causing the egg to crack open and the larval Mothra to emerge. The two battle briefly, but are interrupted by Battra, who is hell-bent on taking out his goody two-shoes twin. Battra accidentally hits Godzilla with his laser attack, and the two begin a vicious battle that ends with them both falling into an undersea volcano.

The film hits a bit of a snag at this point, as the characters (and audience, by proxy) are lectured endlessly about the need to take care of the planet. Mothra gets a good chunk of solo action as she attempts to rescue the Cosmos from a greedy executive in Japan, but it is all just buying time before the inevitable climactic three-way fight.

As we all know, a mere volcano cannot contain Godzilla, and he predictably returns in the film’s final act to battle Mothra and Battra, who have evolved into their flying forms. The two begrudgingly decide to team up for the good of the planet and challenge Godzilla in an epic nighttime battle. 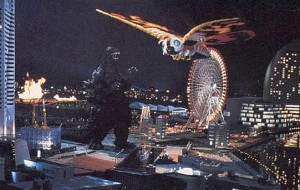 Godzilla vs. Mothra is not without its faults, but it is a definite improvement over Godzilla vs. King Ghidorah. Godzilla, Mothra, and Battra are featured copiously throughout the film, and the action and effects are top-notch. There is only so much you can do with insect-like kaiju, but the filmmakers come up with some imaginative setpieces that help to show off each monster’s arsenal of attacks. In what has become a staple of the Heisei-era Godzilla films, the story is far more complicated than necessary, but it’s at least competently told this time, if too heavy-handed with its environmentalist message.

The human characters are handled well enough, though the constant arguing between the two leads can become grating at times. The writers at least deserve credit for giving us something other than the typical “reporter and his sister” pair of protagonists, at least. Mothra’s twin priestesses’ expanded roles imply their importance not only to Earth, but to the entire galaxy, which is a good way of setting up the inevitable intergalactic foes that Godzilla will face in sequels.

Fun Fact: Godzilla vs. Mothra made more money in Japanese theaters than any other film in the seriesÂ

Memorable Moment: The winged Battra picking up a gigantic ferris wheel and slamming it into Godzilla