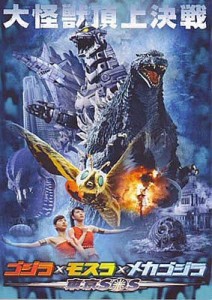 2003’s Godzilla: Tokyo SOS is a direct sequel to Godzilla Against MechaGodzilla, but often feels like a more ambitious retelling of the same story. A new cast of characters is brought in, more fantastical elements are introduced, and there are many more visual references to older Godzilla films, but the core story remains the same. The penultimate Japanese Godzilla film serves as an excellent example of the series at the top of its technical game, but is lacking the tension and immediacy of the previous film.

The film’s fantastic opening sequence shows a duo of Japanese jet fighters encountering a large, unidentifiable entity in the clouds. The clouds disperse to reveal none other than the flying kaiju, Mothra, patrolling the skies. The characters in Tokyo SOS acknowledge the events of 1961’s Mothra, but not any of her encounters with Showa-era Godzilla. As such, Mothra is portrayed as the unstoppable will of nature, willing to destroy human civilization in order to protect the planet.

Mothra’s diminutive twin priestesses appear in the home of MechaGodzilla’s chief mechanic, Yoshito Chujo, to warn him of Mothra’s intentions. Mothra is upset that humans used the skeleton of the original Godzilla (killed in 1954) to create MechaGodzilla, and she will declare war on humanity if the bones are not returned to the ocean. Chujo’s uncle (played by series veteran Hiroshi Koizumi), who played a role in saving Japan from Mothra’s wrath in the events of Mothra, takes the side of the priestesses, pleading with his nephew to allow the soul of the dead Godzilla to rest in peace. 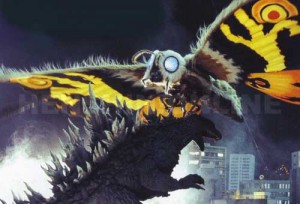 The theme of humans playing God is explored throughout the film, with a heavy-handed parallel drawn between the perverse science behind the creation of MechaGodzilla and the nuclear bomb that helped to create Godzilla in the first place. Strangely absent from this film is Tokumitsu, the scientist responsible for the advancements in biomechanical science that led to MechaGodzilla’s creation. Given that he was one of the principal characters in Godzilla Against MechaGodzilla, it would only make sense for him to play the role of Dr. Frankenstein in the sequel’s ethical deliberations.

Akane, the lead female character from the previous film, makes an all-too brief appearance before heading off for combat training in America. With our former protagonists out of the way, a good chunk of our time with the human cast is spent with MechaGodzilla’s support team, consisting of Oblivious Guy (Chujo), Female Pilot who is in love with Oblivious Guy, Arrogant Pilot, and a few others not worth mentioning. The film really could have used Akane’s strong presence or Tokumitsu’s moral uncertainty to bolster its narrative, as none of the characters we’re stuck with are memorable in the least.

What Tokyo SOS lacks in character development it more than makes up for with monster mayhem. Mothra looks better than ever, and holds her own against Godzilla in a solo battle until her offspring and MechaGodzilla show up. She uses her wings to create typhoon-like winds that blow her toxic scales onto Godzilla, but she is also unafraid to tackle her foe up close. The presence of Mothra’s twin larvae recalls the climactic battle in 1964’sMothra vs. Godzilla, and it is great fun to see the duo playing hit-and-run with Godzilla, pestering him with blasts of silk. It’s difficult, if not impossible, to keep from smiling when watching one of Mothra’s babies track Godzilla’s tail and lunge at it like a playful kitten. 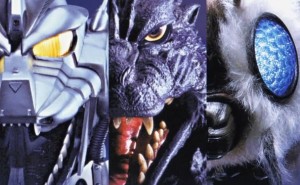 MechaGodzilla mostly relies on the same bag of tricks that he used against Godzilla in their last battle (missiles, lasers, etc.), but his deadly new drill-hand attack is sure to please longtime fans. Plenty of buildings (even the Tokyo Tower!) are toppled during the monsters’ battle (which rivals Man of Steel in terms of “heroic” destruction), and director Masaaki Tezuka clearly had a blast coming up with creative new ways for the monsters to take each other down. The fight sequences are lengthy, but never wear out their welcome, and the effects are consistently good with CGI used sparingly.

Tokyo SOS is the most derivative films in the “Millennium” series (1999-2004), but that doesn’t make it any less fun.  It’s not as tight or focused as its immediate predecessor and lacks interesting human characters, but it deserves credit for setting up an exciting climactic battle featuring two of Godzilla’s most popular adversaries. Tezuka proves once again that he has an excellent eye for spectacle, and relies less upon anime-influenced tropes this time around, choosing instead to pay homage to Toho’s efforts from the 1960’s. While he only directed three Godzilla films, his distinctive style and awareness of what makes for an entertaining kaiju film help to cement his place as one of the more prolific of the series’ directors.

Fun Fact: The dead turtle-like kaiju that washes ashore early in the film is Kamoebas, who appeared in the 1970 film Space Amoeba.