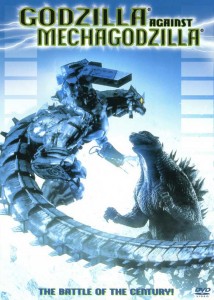 The beauty of the “Millennium” series of Godzilla films, which lasted from 1999 until 2004, is that the producers were pretty much given “carte blanche” to do whatever they wanted with each film. Shusuke Kaneko, director of the excellent Godzilla, Mothra & King Ghidorah: Giant Monsters All-Out Attack (GMK), ran with this freedom, portraying Godzilla as a sadistic fiend with supernatural powers who can only be taken down by an all-star team of kaiju. For the follow-up, 2002’s Godzilla Against MechaGodzilla, director Masaaki Tezuka would go in a very different direction, turning to anime for inspiration rather than folklore to create what is essentially a stripped-down and self-contained retelling of 1992’s Godzilla vs. MechaGodzilla 2.

The beginning of the film will feel familiar to anyone who has seen Godzilla vs. Megaguirus, which was also directed by Tezuka. The same ominous music is used, and once again we are introduced via flashback to a female soldier who harbors a grudge against Godzilla. The soldier, Akane Yashino, is indirectly responsible for the death of her squad at the hands (claws?) of Godzilla, and as a result becomes emotionally closed-off to the world. Several years later, a scientist named Tokumitsu Yuhara successfully uses the skeletal remains of the original Godzilla (killed in 1954) to create MechaGodzilla, AKA “Kiryu” – a biomechanical monster who is to be piloted by Akane and used to destroy Godzilla. 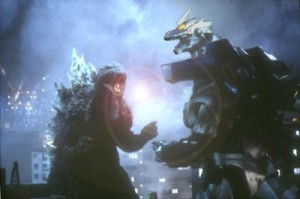 It feels so good to be able to summarize the plot to a Godzilla film in one paragraph! Godzilla vs. MechaGodzilla has a lean, efficiently-told story that nonetheless has some of the more relatable characters in the series. Each character has believable motivations as well as an arc that contains just enough development to cause you to genuinely root for them. Akane is cold and detached, but you sense her intense sorrow and repentance, which never get in the way of her sense of duty as a soldier. Similarly, Tokumitsu juggles his moral obligations as a scientist with his responsibilities as a single father.

Godzilla Against MechaGodzilla is hugely influenced by anime – in particular, the 1990’s series Neon Genesis Evangelion. For those not familiar with the greatest anime series of all-time, here is a quick synopsis. After a mysterious apocalyptic event, Earth is under constant attack by monstrous creatures referred to as “angels,” who can only be stopped by titanic biomechanical robots that are piloted by emotionally unstable teens. Evangelion’s fingerprints are all over this film, from the basic plot resemblance to Kiryu going “berserk” in a similar fashion to Unit 01 from the anime. There’s much more, but I’ll refrain from embarrassing myself too much. Just go watch Evangelion, now! 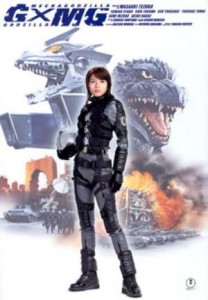 The film builds up to one long battle between Kiryu and Godzilla that is imaginative and thrilling. Kiryu shows a degree of versatility unseen in previous films featuring MechaGodzilla, with proficiency in close-range combat as well as the expected arsenal of missiles and lasers. Kiryu’s jetpack provides the mechanical beast with some much-needed mobility, but one of the film’s biggest drawbacks is how comical it is to watch a CGI monster zip around Tokyo at ridiculous speeds. Aside from the flight effects, the distracting CGI is reigned-in, and we’re treated to some good old-fashioned monster wrasslin’.

While not as daring and unpredictable as GMK, Godzilla Against MechaGodzilla is still one of the most enjoyable films in the series, and arguably the best of the five that feature the robotic doppelganger. It combines two of my favorite geek properties, but shows a surprising amount of restraint by wearing its admiration of Evangelion on its sleeve without being overindulgent. The film is full of eye-popping imagery and plenty of exciting action, and never wears out its welcome. Fortunately, we get a chance to be reunited with Tezuka and Kiryu in the next film, which is the only direct sequel in the Millennium series.

Fun Fact: Titanosaurus (from 1975’s Terror of MechaGodzilla) was originally planned to team up with Kiryu against Godzilla.

Memorable Moment: Not one, but TWO cameos by legendary baseball player Hideki Matsui