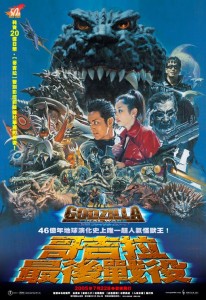 There’s no denying that 2004’s Godzilla: Final Wars is the most divisive film in the entire franchise. It’s an attempt by Toho to repeat a feat they successfully pulled off a decade prior, which is to end a series of Godzilla films with a nostalgic bang. While 1995’s Godzilla vs. Destoroyah was a relatively thoughtful and emotional reflection on everyone’s favorite radioactive dinosaur and his role on Earth, Final Wars goes in the complete opposite direction, opting for manic action and a bevy of kaiju cameos.

Before judging the film’s overall quality, allow me to once again sound like a crazy person by attempting to explain just what the hell is going on in it. Set in the near future, the film follows members of the Earth Defense Force (EDF), whose sole purpose is to defend the planet from the threat of giant monsters. The EDF has an elite squad of “mutant” soldiers who possess superhuman strength and speed, though the source of their superior genes is unknown. The EDF is generally successful at eliminating the kaiju threat, and they even managed to trap Godzilla in an avalanche in the Antarctic region.

With the king of the monsters dealt with for the time being, Earth enjoys a period of peacefulness that proves to be short-lived, as unusual events begin to occur. A massive mummified kaiju is discovered buried deep beneath the planet’s surface, and shortly afterwards a mutant named Shinichi Ozaki (our primary protagonist) is visited by Mothra’s tiny twin priestesses. The priestesses reveal to Shinichi that the mummified kaiju is Gigan – an evil cyborg kaiju from another planet – and inform Shinichi that he will soon play a pivotal role in the fate of the planet. 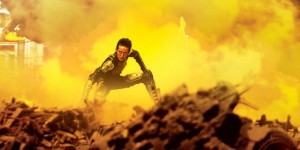 Before Shinichi is given a chance to figure things out, monsters begin appearing all over the planet, viciously attacking major cities. The EDF does its best to deflect the attacks, but they are put on the ropes and all but defeated when the monsters are suddenly beamed up into UFOs. The operators of the UFOs reveal themselves as an alien race known as “Xiliens” who have come to warn the humans of a planet/asteroid that is set to collide with Earth unless the humans use all available weaponry to destroy it. The Xiliens are an odd looking lot, wearing black Matrix-style leather trench coats and, in a nod to Invasion of Astro-Monster, thin wraparound sunglasses. Obviously, these guys are up to no good.

After several interminably long sleuthing sequences, the EDF gathers enough evidence to prove that the Xiliens are lying about the asteroid and discover that their true goal is to enslave humanity so that it can be used as a source of energy to feed upon. With their true colors revealed, the Xiliens release all of the monsters that were beamed into their UFOs back onto Earth, along with a resurrected Gigan, where they gladly return to demolishing human civilization. With no options left, the EDF decides to free Godzilla from his frozen prison so that they can lure him from one monster to another until they are all defeated. Meanwhile, Shinichi and his mutant allies (who are revealed to be human-Xilien hybrids) fight back against their alien oppressors. 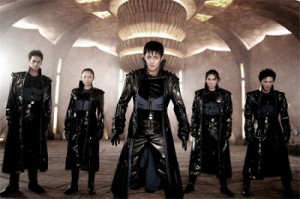 For a film with the primary goal of cramming as many recognizable kaiju on-screen as possible, Final Wars has a surprisingly convoluted plot. At 125 minutes, it has the longest running time of any film in the series (not including 1998’s Godzilla), and much of that time is spent focusing on the human/mutant cast. Not that I’m necessarily complaining, as I enjoy watching sci-fi mutant ninja-soldiers (especially action star Kane Kosugi) using karate to fight aliens as much as the next red-blooded male; it’s just a shame that the monster battles feel rushed as a result, with heavy-hitter monsters like Mothra and Ghidorah being given very little screen time.

Director Ryuhei Kitamura (Versus) focuses heavily on style, crafting many dizzying and balletic action sequences for both the humans and monsters. Anguirus rolls up to perform “Blanka ball” attacks on flying gunships; Godzilla smashes his opponents with some impressive tail attacks; and, in a stand-out mutant-versus-mutant fight scene, a character gets punched in the face… with a motorcycle! The sheer lunacy on display in each and every action scene is to be commended, even if it is mildly off-putting to see veteran kaiju dispatched so quickly by Godzilla.

Much of Final Wars is derivative of Hollywood films – specifically those of the 90’s. The hand-to-hand fight scenes and overall sense of style are straight out of The Matrix, while scenes involving the aliens and their spacecraft feel more like Independence Day or Star Wars. Kitamura’s love of Western culture extends to the film’s casting as well, with one of the principal characters played (brilliantly) by former UFC fighter Don Frye, who has to be the closest thing to a real-life Mike Haggar we’ll likely ever see. 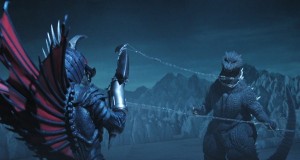 Even the music is largely composed by a Western musician: Keith Emerson of Emerson, Lake & Palmer fame. Emerson’s soundtrack unsurprisingly sounds like it’s straight out of a 70’s progressive rock album. The choice of composer is an unusual one, and the music does not really fit a Godzilla film. That being said, after a fight scene featuring music by the band Sum 41 ends, you’ll be happy to go back to Emerson’s cheesy synthesized organ music.

There is absolutely a “train wreck” quality to Final Wars, but I have to admit that it is an awful lot of fun to watch if you don’t take it too seriously. Like most fans, my biggest complaint is that the film is not very reverential of the series’ legacy, which is strange considering its premise and all-star kaiju cast. Plenty of recognizable monsters make an appearance, but it rarely feels like proper homage. The “westernization” of Godzilla doesn’t bother me very much personally, but it is somewhat unexpected to see in a film that is meant to honor the legacy of one of Japan’s most famous pop culture icons. If you turn your brain off, however, you can easily enjoy this gleefully campy spectacle.