As a child, much of my imagination revolved around the exploits of Godzilla and his gargantuan allies and rivals. Sure, the knock-offs, such as Gamera the flying turtle (friend to all children!) received their fair share of attention from me as well, but I was always first and foremost a Godzilla fan. I pored over every little detail of even the most superfluous of Godzilla-related products as if it were the Holy Bible, and when I had run out of options, I’d grab a pencil and make up my own Kaiju (giant monsters) for Godzilla to battle.

My love for the iconic anti-hero began when I first watched Godzilla: King of the Monsters, starring Raymond Burr (TV’s Perry Mason), on a barely-functioning television set at the tender age of five or six. Knowing little-to-nothing about World War II, most of the heavy-handed war and nuclear weapon parallels went over my head, and I sat, transfixed and patiently waiting for the monster’s next all-too-brief appearance. 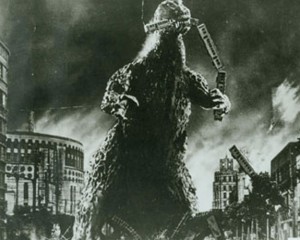 I wasn’t necessarily rooting for the monster to destroy the city, but the movie kept the horrors of the destruction distant enough for me to zone out whenever a character would begin to prattle on about how horrific the devastation was. I was deeply saddened when Godzilla was killed at the end of the movie, barely able to contain the anguish building up in my tiny body, when something amazing happened: another movie began to play, and Godzilla was in that as well! Clearly he had some sort of regenerative capability, and had changed his mind about humanity, because this time he was on our side, defending us from monsters sent to Earth by sinister space aliens.

And so, my love of the Godzilla franchise continued to blossom. I scanned TV Guide regularly and thoroughly searched video rental stores for my next fix, often being forced to settle with renting Godzilla vs the Smog Monster for the umpteenth time. As the years passed, and the Internet made it possible to read about the Godzilla films that never made it to the US, I became aware of the existence of the original Japanese version of Godzilla: King of the Monsters, simply titled “Gojira.”

Eventually, this original cut was released on DVD, and I was amazed by how much darker the tone was. It turned out that all of the scenes with Raymond Burr were added for the overseas release, and without his character’s contrived presence imposing a somewhat detached perspective of the destruction, the film is remarkably somber. Grim scenes such as a mother comforting her children by telling them they’ll soon join their dead father in heaven give viewers a chance to comprehend the post-war fears felt by the entire country. While I dislike just about any form of censorship, I can say that I’m glad that I saw the King of the Monsters version of the film as a child instead of the Japanese version, since I’m honestly not sure if I would have been able to handle it.

2014 is shaping up to be an incredible year for Godzilla fans. It marks the 60th anniversary of the original film (be sure to check out the 2012 Criterion Collection Blu-Ray, which is the definitive release), and we’ll be seeing a new Godzilla film in theaters after a 10-year hiatus. Judging by the recent teaser trailer, it looks to be everything fans were hoping for, and the perfect opportunity for the series to build a brand new base of fans.