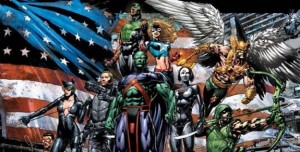 First off I want to say that I am really going to miss Geoff Johns doing Green Lantern. I had very high expectations for Justice League of America, probably because being a “newer” comic book reader characters like Hawkman, and Vibe are fairly new to me. I am looking forward to digging into these characters and seeing how this story will play out.

Before we get into the actual story, lets discuss the artwork. The artwork is not as good as the Justice League. This art seems to have a darker feel to it. While I like that it has a darker vibe to the artwork, which it will allow it to separate it from the other title, I’m not sure if it works though out the whole issue. I think it worked well during the frames in the woods, but didn’t work for when Stargirl was signing autographs. While the art can distract it isn’t so bad that it ruins the book. The story makes up for it.

Justice League of America is a typical first issue setting up the story, as well as the team. I can see how some people might find the story to be a bit slow but I prefer it to be that way. By giving the issue a lot of dialogue it can help set a solid foundation and really develop this into an interesting story. This could allow some of the B list DC characters a time to shine, as well as some more known characters (like Green Arrow and Hawkman) a chance to redeem themselves from their current runs that have been subpar. 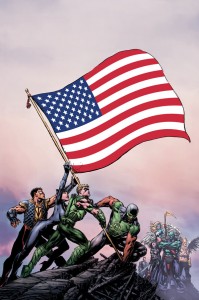 We begin at the time an unknown hooded figure running though the forest. An explosion occurs and this person is badly hurt and we see Superman, Batman, Wonder Woman and the rest of the Justice League are behind the chase. Next Waller and Colonel Trevor are talking about how the United States government need heroes to back them up incase of emergency since the original Justice League has not been reliable. Trevor wants no part of it until Waller shows him Wonder Woman and Superman kissing. His love for Wonder Woman and wanting her to be safe is what makes him agree to help create the JLA, something that can help protect the government from the original Justice League.

We now get to see each potential member shine for a few pages. Hawkman, Katana, and Catwoman had some great frames. I thought Vibe and Stargirl’s pages were not that impressive. I love the fact that Simon Baz is part of this and his character should be very interesting in this team up. We really do not get to see Martin Manhunter in action. We hear about him and then he shows up and we get an interesting conversation between him and Trevor, which I hope plays into the story later.

At the end the person who was running though the woods is brought into the facility and we find out that it was Green Arrow. He mentions the Secret Society but we don’t learn who is heading it up because Oliver Queen flat lines.

Do I think Green Arrow is dead of course not. It will be interesting to see why the Justice League was chasing him and who is behind the Secret Society. I hope that we get the original members in the story for a few issues so it can help establish the story. This will be interesting to see how the original members handle a replacement team being put in place which we can see is making them angry. Could they turn out to be the villains?

Overall, Go out and BUY Justice League of America 001 – If you are new to some of these character like I am it can be a good way to introduce some b listers. Also we get a really interesting set up story that I am sure Mr. Johns is going to deliver with a lot of excitement and great story telling.

Chime in on Twitter (@joshraj9) or in the comments below and let me know your thoughts on the issue!