Blood Stone is the 2nd game developed under Activision after acquiring the Bond license and the first to be developed by Bizarre Creations. The game is a 3rd person shooter with racing segments thrown in for good measures. It was released on the PlayStation 3 and Xbox 360 onÂ NovemberÂ 2nd, there is also a Nintendo DS version crafted by n-Space.

With the MGM financial situation, Bond 23 was postponed until Nov 2012 at this point, so Activision and Bizarre Creation took the opporunity to create an original Bond tale starring the current James Bond, Daniel Craig. Does this game leave us a little shaken? 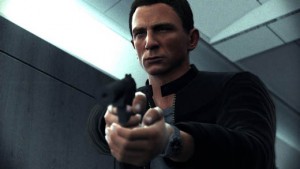 There’s also a multiplayer component, which I’ve only played twice, and probably will never play again. I don’t think that’s enough time to give it a fair assessment, but I think it more than tells you how I feel about it.

All in all, I think the game does a great job in capturing the “feel” of being James Bond, it just kind of misses the boat on everything else. It is a functionally game, and I had a lot of fun with it, but with a run-time of about 5 hours, and little to no reason to play it again, I can only recommend a rental at best. Which pains me as a hardcore Bond fan.