Remember being randomly assigned partners for group assignments in school? Everyone trying to figure out which role an individual would be best suited for, but in the back of your mind thinking you could probably do that all on your own anyhow?

The Illegitimates 4 feels like that in comic form. The only major difference is these random partners are your newly discovered siblings. 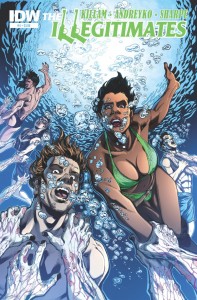 This issue kicks off with the ragtag group of heroes… sketching out on each other. Kiken Kaze is busy checking out his “sister”,Â Saalinge M’Chumba, and when it is pointed out to him how “gross” that is. He retorts that he isn’t entirely sure she is his sister. And it’s a compelling point, this whole ordeal has been pretty hectic and while they are being told these secrets, none of it has been proven or disproven to them yet.

I also bring it up because while this team is supposedly siblings, there is still a huge element of distrust among them. When they reach their destination, an “oil rig”, they don’t want to split off into teams even if it would be more sensible because they don’t know if the others will signal the big bad. The only reason they are working together is because they share a common goal, but doesn’t mean want to achieve it the same.

It has been an interesting thread watching the siblings try to interact and get to know each other. The are well-established individuals (and some with more training than others), but need to work as a unit to succeed. Which is doubly true when you get to the villain’s major reveal at the end.

As much as I love the sibling dynamic, I love the old-school Bond villain vibe that Dannikor is throwing down. I mean his grand scheme is a brain control device. Not to individually control someone, but an entire world of people. That’s straight up goofy fun. One of his bases of operation is the oil rig they attack. Why? Who knows, but that’s Blofeld in Diamonds are Forever. And won’t ruin the finale, but also nods to Bond villains of the past. It’s fun watching him work.

The art in the book is solid. Some of the facial expressions were a bit off. Especially the close-up to the director when he discovered what Dannikor had planned. It was simply comical.

Review 6 (Out of 7) – It is a fun issue with decent action, but more setting the stage for the final confrontations.Â