To steal a line from pretty much any movie commercial that achieves this, “The Expendables is the number one movie in America.” Most aren’t surprised by the success of a movie that so narrowly scoped in on its audience that it had to succeed. The Expendables for anyone living under a rock for the past year is a movie that takes some of the biggest action stars of the past 30 years and puts them in a movie together. The actual movie doesn’t really matter once you have a cast this strong.

The wheels started turning over at the Nerds headquarters. If this movie is a success, what would Hollywood do to follow it up? The most likely scenario would be an Expendables 2, its just the way of the world. But we would like to present the Fexependables or the Female Expendables.

When crafting this list, we tried to closelyÂ mimicÂ the casting of the Expendables. It features older stars like Stallone, Willis and Schwarzenegger. It had more contemporary based heroes such as Li and Lundgren. And finally it featured up and coming stars like Austin, Couture and Crews. This list will serve as a mix and match of those era.

The first picks were both the easiest and hardest to make. It came down to the simple fact that Ripley survived through more sequels than our number 2 pick. Yes, Sigourney Weaver who has had her fair share of alien encounters and survived. She also worked alongside the Ghostbusters and traveled to the city of Pandora this past winter. If you want someone on the front-line of your movies, there are few women who come with as muchÂ credentials. While our number one/team captain spent most of the 80s thwarting off aliens, our number 2 spent her time dealing with killer cyborgs. Yes, the star of the first two Terminator movies, it is hard not to include Linda Hamilton on our list. Sadly, she was killed off somewhere between the events of T2 and T3, maybe she just saw the writing on the wall and knew the movie would suck.

However when it comes to female action heroes, there are no two women more recognized than Sarah Connor and Ellen Ripley so who will be joining them on this dream team.

If anyone represents the resurgence of the female action star, it has to be Uma Thurman. Ignoring her turn asÂ villainousÂ and campy Poison Ivy and more recently as Medusa in the Percy Jackson movie, Uma Thurman gave us The Bride. The main hero of the two Kill Bill movies, The Bride spends the better part of 4 hours finding new and exciting ways to seek revenge on those who wronged her. She’s bad-ass and takes fashion lessons from April O’Neil.

Perhaps the most-well rounded female action star of all-time. She has enjoyed turns as Lara Croft, Mrs. Smith, Fox from Wanted and most recently as Salt. Sure not all of the movies she stars in turn to gold, but she has the experience and credentials to dance at this party.

The star of Crouching Tiger, Hidden Dragon, the first Bond girl to really give Bond a run for his money and she helped Brandon Fraser keep the Emperor’s curse. Yeah, she may not have the most mainstream movies on her resume, but she has proven she can hang with the big boys and knows how to kick some ass.

Sure she represents the small screen, but she spent 7 years kicking the undead’s ass. And not just vampires. She took on demons, werewolves, clones and the ultimate evil. She was also able to attend High School and college while doing this. 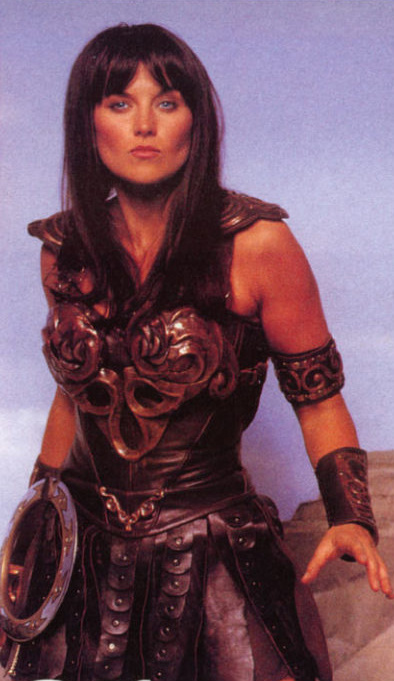 The final member of the team is also a small screen star, but much like Gellar spent the majority of the 90s kicking ass as warrior princess Xena. And more recently stars in the HBO series Spartacus.

Now that’s the heroic side of the coin, but every good hero needs an even better villain. So we have crafted together a syndicate of women who just know how to be sinister.

She has a look about her that pulls off hot and demented at the same time, but aside from her turn as the sexy and sinister Catwoman. She also learned the crime and drug business from her boyfriend Scarface. And once again turned to the dark-side in 2007’s Stardust. She’s smart, sexy, sinister, sneaky and she is the leader of the opposing team.

We love Halle Berry don’t get us wrong, but the chick just ruins action movies. Remember Die Another Day? Remember Catwoman? Remember X-Men 3? What is the common factor in all of those movies? Which is why she would play the purr-fect campy foe to our team. Who can’t imagine this sexy piece of woman seducing a legion of men to do her bidding? And if she is on the villains’ side really doesn’t have to do that much acting.

We wanted to fit her onto the heroic side, but ran out of room, but this femme fatale is no stranger to the action scene. As one of Charlie’s Angels, she kicked ass like no one’s business. But her biggest action role was actually against one of the heroes from above which is why we cast her in the role of a foe. Yes, Liu and Thurman had a blow at the end of the original Kill Bill movie. In addition to this fight, she also played an undead reporter which is the perfect fodder for Sarah Michelle Gellar’s character.

So there you have it, 7 deadly and powerful women and 3 women who can oppose them. Hollywood the ball is now in your court.