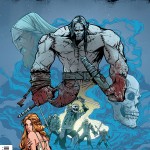 Sometimes you need to just jump into the water instead of getting your toes wet. Helheim #1 starts off with our main characters already on the run from some unseen threat. The men attempt to keep ahead of this unknown threat, and when one is injured, his friend, Rikard, stays behind to help him out. This obviously slows them down in their retreat. Finally, after dropping the dead weight, they make it to safety, only to find that their pursuers are too close behind so they must stand and fight.

This is when the comic really begins to take off, as they pretty quickly do away with their chasers, and retreat to the safety of their camp. Only everything isn’t what it appears as the men they just slayed were decoys for the Night Creatures. Beings that look like re-animated skeletons. The now-exposed camp does battle with the Night Creatures, at some high costs. The comic ends on a rather intriguing cliffhanger, which will help build the backbone of the series, but won’t spoil it.

This issue works as a fantastic introduction to the series. The breakneck pace allows for a lot to happen, we’re introduced to characters, to threats, to personalities, to conflict and a lot in these 26 pages. What’s more impressive is they are able to wrap this story in such a mystery that you feel compelled to continue reading without making it feel like you didn’t get a beefy story in here. You actually get a pretty solid arc in this issue. We get an introduction, a threat, a climax and some form of resolution before throwing the table to the door.

(Just as a note, the review copy we received didn’t have the first half of the book colored, but we were informed the final version would be fully covered.) 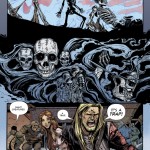 The art in the title is pretty solid. Some nice line with detailed characters and some interesting backgrounds. Some of the action early on was a bit difficult to follow because of how quickly the characters were moving and engaging their foes, but whenever the book took a moment to breath, it really gave every panel life.

While it really won’t effect the general reader, seeing a half-colored, half-non-colored version of the story, also showed how impressive the character design is in the book. One of theÂ strengthsÂ of the Walking Dead is the ability to distinguish core characters simply by design because of the lack of color. The same could be said of our leads in this book, and while their pursuers are a bit more homogenized in design, we don’t really need toÂ differentiateÂ them because are simply there for the slaughter.

Recommendation: Buy It– This is coming with the caveat that the series fulfills the promise of it’s cliffhanger. It has built an interesting world and opened a wide door in the final pages. Now I want to see them kick it in and go crazy!