It’s sad how often a novel premise gets butchered in execution. After years of watching questionable movies, you learn too often that there is a good movie buried somewhere under all the terrible decisions or an inability to really know how to make it to 90 minutes. 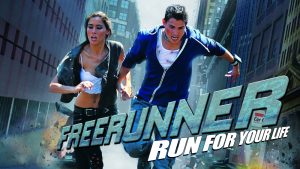 Freerunner is one such movie. First, let’s start with the concept of freerunning/parkour. My initial thought was it was odd to make a movie about the movement in 2011 when the popularity had peeked in the mid-2000s, but then I thought of all the movies centered around it… and honestly couldn’t come up with any. Then the opening sequence happened and I was engaged. Parkour is just visually a ton of fun to watch. Granted, I wish it were filmed slightly better, but guess wanted to capture the kinetic movement of the art.

A solid start then the movie begins proper and we’re saddled with 40 minutes of exposition as the rules of the event are established, and the main character given motivation and at some point a random montage of working out followed by a random club scene/hazing. Now don’t get me wrong, a bit of set-up and plot isn’t a bad thing, but it really isn’t anything meaty. Stop me if you’ve heard this before, but the hero wants to better his life and the life of his loved ones. Comes up with a scheme to help them… and that’s it. There’s no major twist or development just played straight.

After the slowdown, we’re back to the parkour for a bit, but this has the added element of each of the runners kind of being a dick to each other. Not gonna lie, it’s actually kind of fun to watch.

THEN, and mind you we’re more than halfway through the movie at this point, the central conflict of the movie is finally introduced. The freerunners are taken hostage and have bomb collars placed around their neck. They are tasked with reaching a destination within an hour, but they need to keep pace with the other freerunners or they go… boom. Not unlike the Suicide Squad! 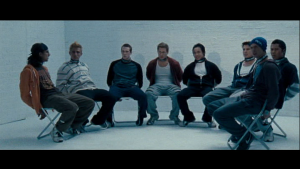 And here… yes here is where the movie just becomes a mess of deaths, betrayals and odd cuts to the most over-the-top personas making bets on these races. The movie doesn’t leap, but limps to a finish, which also isn’t that thrilling of a finale.

Now back to my original point, I love these pseudo reality TV type combat movies. A huge fan of The Hunger Games series, The Running Man, Battle Royale and even the original The Condemned. The notion of doing that with freerunners was actually intriguing to me, an element of verticality and speed you don’t see in the other films in the sub-genre, but the film seemed interested in anything else, which was a real shame.

As for the drinking game, it kind of fits into the overall structure of the movie. The opening sequence has a few drinks then it pretty much dries up during act one. Once act 2 begins though, it’s just a nice refreshing pace through the end. 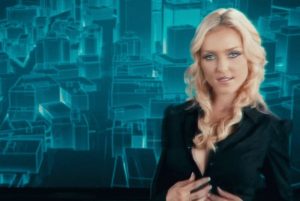 You’ll see a lot of her

Except for the explosion rules, most of the rules were used pretty often. I’d replace the explosion with anytime the characters interact with the villain in some fashion. Also we modified the leaping rule to include them jumping over any gap. It doesn’t add a ton of drinks, but it broadens the rule without making it too overwhelming on your stomach.

Also “bombs” aren’t really mentioned so we just went with them talking about the devices. And finally as a judgement call we decided that anyone saying “Freerunner” during the movie would be a drink and not a shot since it’s a profession.

Review 3 (Out of 7) – The movie had the potential to be so much more, but you can’t make a living off of potential. I would just find the freerunning sequences on Youtube or just watch videos of that.