Hangover: Dungeons & Dragons and the Nature of Ham

For Hangover, we generally attempt to review the movie we watched for the weekend. This week we can cut through the flowery words and tell you that Dungeons & Dragons isn’t really worth checking out. Even with our glorious drinking rules, there’s just not enough to keep your interest going. 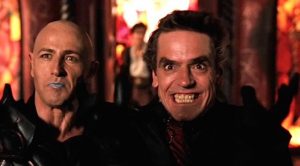 Most of the movies we check out for 151 Proof Movies are terrible by design though so why not go into details for a review? Because while the movie forced me to check out early, there was an element that got me thinking. I often tell people that words have meanings, which is quite literal, but usually when people abuse language. But words also have connotations, both positive and negative.

And 3 of those words that came to my mind during the film were “cheesy,” “campy” and “ham(my).” When you use any of these words to describe entertainment, they tend to come with a negative connotation. And I get it, I get where the belief comes from, but I do think it’s misguided. 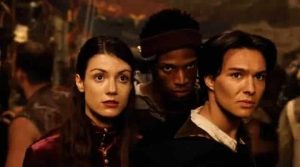 Tone is one of those things in entertainment that you really need to understand before anything else. But certain tones allow you a bit of leeway when producing your product. However, if you decide to play in the extremes, you need to be really mindful of what you are aiming for. When you don’t have a grasp on them though that’s when you get the negativity that surrounds terms such as cheesy, campy and hammy.

Take for example the difference between Adam West’s Batman and 1997’s Batman and Robin. One completely understood it’s campy nature and ran with it. The other wanted to embrace camp inside of a neo-gothic world. One remains fondly remembered as an unique part of the Batman cannon, the other is infamous among comic fans. The difference between being able to run full steam ahead with your tone and trying to piecemeal it.

Now let’s tie this back into Dungeons & Dragons, Jeremy Irons is hamming it the hell up in this movie. Whenever he is on screen, you can’t help but pay attention. One of the reasons the movie lost my interest is that he is pretty much MIA throughout the 2nd act of the film.

His performance is fun and lively, but it seems like it was stolen from another movie. Like no other actor or character is given the same level of energy or lines so I’m not sure if the role was pitched to him differently or how he felt he should best play it. However, like I said he is the best part of the movie. The movie isn’t harmed by being hammy or cheesy because it isn’t, but watching Irons on-screen you can’t help but wonder why the rest of the movie didn’t morph to match his energy. It would go from forgettable to at least entertaining.

Which takes us back to the opening paragraph, I don’t recommend Dungeons & Dragons and that’s disappointing because it is a vast world with a ton of potential, but the movie doesn’t know what to do with the material.