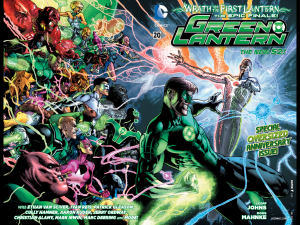 Note: The following review is full of SPOILERS

Well there we have it the end of Geoff Johns historic 9 year 100 issue run with Green Lantern, I am very sad to see him go but at the same time Geoff you are the reason I started reading comics so thank you! I recently started with rebirth and went all the way though this current issue over the last 3 or 4 months and this issue was the way for him to finish that run. A $7.99 price tag that lived up to it.

Geoff Johns was able to take a series that was almost meaningless in the superhero world and and a “hero” that was beyond saving and made both the series and the hero (Hal Jordan) into an iconic character again. It is not often that we have a story change the whole history of a series, what Johns did is create basically a new universe that will be remembered and considered the true history for years to come. He was able to take so many different character no matter how small (I’m looking at you Bzzd) and feel so many emotions. He turned what was one Corps into many and actually made you at one point or another root for each and every corp. He changed Green Lantern for the better!

On to the Review!

I love the way the issue started. We have a new lantern coming to find out about the history, and he wants to know what every new lantern wants the know, the history of Hal Jordan. We get a nice summary of Johns run in these pages. At the end of the day this really is about the rise, fall, and redemption of our hero Hal Jordan. So the story just continues on into the issue.

We have the first lantern still causing all of his problems though out the universe and finally the Corps are going to make their final stand. We have been building up to this since the start of the New 52 and if I could find one flaw in this issue it would be with how the first lantern was dealt with. We got a battle of the many corps members vs the first lantern but it felt as if this battle was just overshadowed with everything else that happened. One of the things I did enjoy in the issue regarding the first lantern is when he gave the guardians their emotions back. Seeing them actually afraid and sorry for the things that have done to the universe actually made you feel sorry for them. I have always felt that they were the hidden “villain” though out the run, and to feel sorry for them was a nice touch.

I want to note here that though out this we got each character a chance to shine which was quite enjoyable and something that really made this issue feel special. 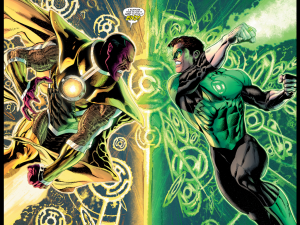 Sinestro is still mad about his home being destroyed and wants to guardians to pay for what they did. Hal who is alive and a Green Lantern again tries to stop him. It is found out that Sinestro had already killed all of the guardians and Hal could do nothing to stop it. We get what I felt was the most emotional part of the issue maybe even in Johns entire run. The question that Hal wanted to ask all those years ago is finally reveled and Sinestro gives his answer “Were we ever truly friends?” “That’s the tragedy of all of this, Jordan. Hal, we’ll always be friends.”

We then return to the beginning of the issue with the new lantern being told and that is the story. He then asks what became of all of these heroes? This is one of the most satisfying parts of the issue. We hardly ever get a definite conclusion in comics but here we do. The story continues and goes into each character (the earth lanterns and the “main” lantern from each corp) they each get a happily ever after. It is the first time we see our heroes get entirely what they want and more importantly what they deserve. The guardians who guarded the first lantern take over as the new guardians and they have kept their emotions. Hal and Carol get married, Guy is telling old war stories, John is a senator, and Kyle helps heal the wounded. There is one noticeable character not talked about here and its Sinestro. The new recruit asks about him and the storyteller (a hooded figure though out called Toris) tells the new lantern that those pages have be taken out of the book. I for one believe that Toris is actually Sinestro himself.

We do cut to seeing Sinestro who had spared Ganthet’s life and is hiding him away where he gets to see Sayd who is also alive and well. This was another great moment and emotional one. Sinestro has a Darth Vader like moment where even though he did all this bad he still semi redeemed himself in the end.

Overall, even with the $7.99 price tag Green Lantern #20 is a MUST buy. We get a lot of throw back memories for Geoff Johns run with the series and it is the perfect send off to what is now a major character in the DC Universe.

Positives:
+The Question is finally asked
+Sinestro’s ending
+The happily ever after

Green Lantern #20 is a 7 out of 7 in my book. While I wished for the first lantern battle to be a bit more it did not ruin the overall experience for me. So Geoff Johns there you go a perfect score!

Geoff Johns thank you for creating a new fuller more colorful universe for generations to enjoy. “In the brightest Day, In the Blackest Night, Let those who worship evils might, Beware my power GREEN LANTERNS LIGHT!” 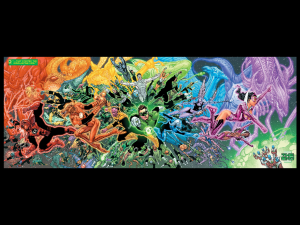