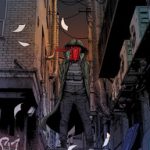 Review 5 (Out of 7) – I’ve reviewed my fair share of number 1s for the sites but starting a comic series with a number 2 is a whole different beast. There’s a certain level of pre-knowledge that comes with reading this book and a bit of it was lost on me. Though the characters do their best to explain a lot of things.

With all the exposition on display, it’s quite ironic that I found the best part of the issue to be the segments where there was no dialog or limited dialog. Such as the opening and closing sequence of the book which is able to tell a story with the book’s well designed characters and facial expressions. Pain, anger, frustration and so much more is conveyed through the art and it elevates the book.