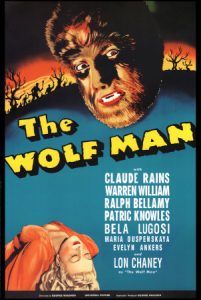 Even a man who is pure in heart, and says his prayers by night;

May become a wolf when the wolfbane blooms and the autumn moon is bright.

This iconic poem is recited several times throughout 1941’s The Wolf Man, which, although not Universal’s first attempt at making a werewolf flick (that honor belongs to 1935’s Werewolf of London, which was a commercial disappointment), is the most fondly remembered of the studio’s lycanthropic offerings. The film was a massive success and helped propel Lon Chaney Jr. to monster movie superstardom.

Werewolf movies have strongly endured because moviegoers are drawn to the often tragic duality of the creatures. Audiences relate to, and often fantasize about, the feral side of the inflicted character, who can act on their animal instincts without regard for morality. The best werewolf stories allow the audience to indulge in the violence and brutality of the beast’s rampages while being sympathetic to the human side, which is inevitably forced to reconcile their actions to their humanity. Some classic werewolf flicks such as Ginger Snaps use the transformation into a wolf as a metaphor for the turbulence associated with a specific period of one’s life, but The Wolf Man chooses to focus on a more traditional story akin to a Greek tragedy.

The Wolf Man is about a charismatic and pragmatic man named Larry Talbot (Lon Chaney Jr.) who moves to Wales after his brother’s passing to assist his father with the estate. While exploring the town, Larry meets and becomes entranced by a woman named Gwen, who works at an antique store and sells him an unusual cane with a silver wolf decorating the top. Much of the first half of the film is about Larry’s pursuit of Gwen, which in all honesty is creepier than much of the overt horror in the second half. The film presents Larry’s courtship as romantic, but between his spying on her with binoculars and stalking her at her job, Larry comes across as rather unlikable. Talbot’s unabashed voyeurism puts Jimmy Stewart’s character in Rear Window to shame! 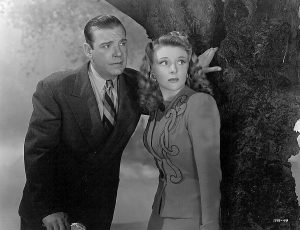 Moving on from the uncomfortable “romance,” Larry accompanies Gwen and her friend Jenny to the woods to meet a gypsy fortune teller named Bela (played by Bela Lugosi, naturally!). Larry and Gwen wander off while Jenny has her fortune told by Bela, who begins to act erratically and insists that Jenny leave immediately. Jenny runs away into the woods, but is attacked by Bela, who has fully transformed into a wolf. Larry, responding to Jenny’s screams, runs to her and kills the wolf with his silver-headed cane, but not before the wolf bites him and kills Jenny. The next day, Larry is surprised to be questioned by police about the death of Bela, who was bludgeoned to death and found (in human form) alongside Jenny and the silver-headed cane in the woods. Larry insists that he killed a wolf, but his claims are met by skepticism by the townspeople and the colonel investigating the case. However, that doesn’t stop the colonel from returning the murder weapon to Larry in one of the film’s most unintentionally comedic moments.

Larry begins to have disturbing hallucinations and eventually transforms in a man-wolf hybrid who is compelled to kill anyone he comes across, starting with the town gravedigger (a doomed profession if there ever was one in horror). Satiated after the kill, Larry retreats back to his home, where he returns to human form and his senses. Larry faces even more adversity when his confessions are met with skepticism by his father and the town doctor, who are convinced that Larry is simply mentally ill and imagining his supernatural affliction. With nothing to stop him, Larry continues to turn into a werewolf and eventually attacks Gwen with the intent to kill her. The werewolf’s attack is interrupted by Larry’s father, who, unaware of the beast’s true identity, beats it to death with (wait for it) the silver-headed cane that Larry used to kill Bela.

While most of Universal’s monster movies are tinged with tragedy, The Wolf Man is tragic in a uniquely unsettling way. Screenwriter Curt Siodmak – a Jewish man who lived in Germany until the 1920s – meant for the film to partially be an allegory for his experiences during the rise of the Nazi party before fleeing the country. He considered himself and Larry Talbot to both be helpless victims forced to endure something terrible and entirely undeserved. Of course, even good men can be haunted by their own inner demons, and Larry’s duality is just as much about his state of mind as it is his physical transformation. The original draft of the script even posited the idea that Larry isn’t really transforming at all; the werewolf’s curse is only in his mind. 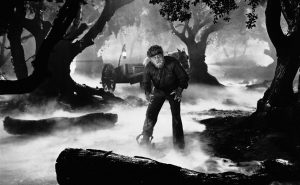 Despite the old-timey opening credits, where each of the film’s main actors is shown one-by-one, The Wolf Man definitely feels like the product of a slightly more sophisticated era of cinema – at least in terms of acting. Lon Chaney Jr’s acting feels far more natural than the outlandish performances in James Wale’s monster movies, making his hardships feel especially relatable to audiences (at least when he’s not stalking his love interest, though I guess that was considered romantic at the time). Larry comes across as a totally normal, affable guy, making the irony of the film’s final scene that much more of a gut-punch. The supporting cast does its job well, though the mixture of British and American accents is somewhat confusing in a story set in a small Welsh town.

The film’s technical aspects, while not on the level of Bride of Frankenstein, are solid. The outdoor sets, filled with gnarled trees and swirling mist, are appropriately foreboding and make the woods feel like an actual character within the film. Special effects are scarcely used, and while Larry’s transformation scenes pale when compared to the mind-blowingly grotesque scenes in werewolf movies made decades later, they get the job done well enough. The makeup, on the other hand, is fantastic, with Lon Chaney Jr. completely unrecognizable underneath layers of fur. Why his character doesn’t turn into an actual wolf like Bela did is beyond me, but I won’t complain.

The Wolf Man is an interesting movie to dissect, but falls in the middle of the pack of Universal’s monster movies in terms of entertainment. The first half is rather slow-moving and almost entirely held together by Lon Chaney Jr’s performance, while the second half makes you wish for more werewolf action. The story is relatable and undeniably influential to the genre, and I admire the attempts at poetic irony, which significantly add to the Greek tragedy vibe. At the very least, the film is notable for establishing many of the tropes that continue to define werewolf films to this day.

Memorable Moment: Larry’s attack on the gravedigger is suitably frightening, and shows off the makeup effects very well.