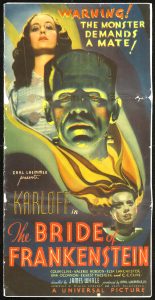 OK, I know I said I’d save sequels for later, but I’ll cheat just this once, because the film is so significant (and technically introduces a new monster). 1935’s Bride of Frankenstein is the much-acclaimed sequel to the seminal Frankenstein, and often considered the greatest of Universal’s “monster” movies. James Whale returns to direct with Boris Karloff (who is credited as “Karloff” this time, as opposed to “???” in the original movie) reprising his role as Frankenstein’s monster, and I have to say that I agree with each and every bit of hyperbolic praise directed at this movie.

Bride of Frankenstein begins right where Frankenstein left off, with a bizarre-yet-entertaining introductory scene featuring Mary Shelley (author of the Frankenstein novel) revealing to her friend Lord Byron (who is played by the “r”-rollingest over-the-top actor in a film filled with over-the-top actors) that there is more to the story of Dr. Henry Frankenstein and his monster than the first movie indicated. Presumed dead after being crushed by a burning windmill, the monster is actually alive, and crawls to the surface only to be pursued once again by an angry mob of rural villagers. 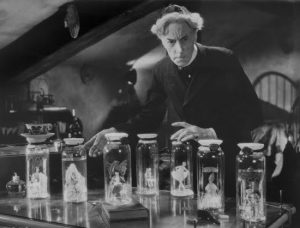 Events proceed mostly as expected, with Frankenstein’s monster grunting a lot while running from villagers and even killing a few who get in his way. The film could have easily settled for a “more of the same” approach, but instead goes in an unexpected direction by having the monster stumble into an elderly blind man’s home. The man calms the monster down and tells him that he is welcome to stay at his home. The scenes showing the evolving friendship between the monster and the blind man are beautiful and heart-wrenching, providing pathos rarely seen in the genre. After staying with the blind man a while and even learning to speak some simple phrases, the monster is discovered by the townspeople who are hunting him, and he is forced to flee once again.

When not developing the monster as an actual character, the film focuses on Henry as he struggles to come to terms with his immoral actions from the previous film. Now married and determined to put the past behind him, Henry must deal with temptation in the form of Dr. Pretorius – a man who is similarly obsessed with creating life using frowned-upon scientific methods. Pretorius is determined to coerce Henry to help him create a mate for the monster, and resorts to some pretty extreme extortion to gain his assistance. The two doctors eventually get enough body parts to create a “bride” for the lonely monster, but will she be willing to accept him? 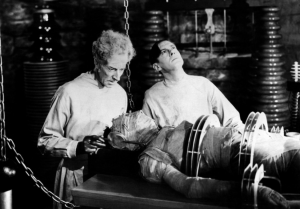 I can honestly say that Bride of Frankenstein represents everything that is great about the Universal monster movies. The visuals are as moody and atmospheric as you’d expect from a James Whale movie, and the makeup effects are top-notch, allowing the monster and his bride to easily emote while still maintaining monstrous or otherworldly visages. Cinematography and set design live up to the high standards of the film’s predecessors and mark a high point for the Universal monster movies in general, with each set complementing the scene’s mood perfectly.

Eye-popping visuals are to be expected from this series of movies at this point, but I have to point out the wonderful way that music is used in Bride of Frankenstein. In the scene in which the monster meets the blind man, Ave Maria is used to beautiful effect, initially being played by the blind man on a violin before transitioning to a background organ version. Another great use of music is in the film’s climactic sequence, in which Frankenstein and Pretorius labor to bring the monster’s bride to life. The bride’s disembodied heart beats loudly with everything else silent for a while before music steadily builds to the rhythm of the heartbeat. The crescendo continues until it becomes a majestic fanfare that perfectly suits the mood of the scene. The sequence is incredibly tense, and is easily my favorite in any of the Universal monster movies. 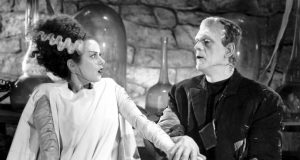 It’s really difficult to find anything significant to criticize, but I would say that the acting can be a bit inconsistent. While the majority of the cast is excellent, Colin Clive can be distractingly cheesy as Henry Frankenstein, and some of the minor characters are incredibly grating (I’m looking at you again, Una O’Connor!). The actor who plays Dr. Pretorius, however, deserves special recognition for being over-the-top in a wonderful way, as his character is entertaining and compelling even when he is cruelly exploiting the monster’s desire for companionship. Another minor complaint is that, similar to The Invisible Man, the tone can go from comedic to dramatic to horrific at the drop of a hat. This isn’t necessarily a bad thing, though, as the film borders on being satirical at times.

Bride of Frankenstein is the masterpiece everyone has been telling you it is for as long as you can remember (yes, it is The Wire of monster movies). It has aged perfectly, and can be dissected and analyzed in myriad ways (I didn’t even touch on the alleged homosexual subtext in the Pretorius/Frankenstein scenes). It’s one of those rare films that surprises you with something new each and every time you watch it, and has aged well despite some scenery-chewing performances. It’s scary, funny, sad, and surprisingly relevant all these decades later.

Fun Fact: Elsa Lanchester, who played the titular bride, said her jerky, robotic movements and hissing were inspired by aggressive London swans.
Memorable Moment: There are so many! This last viewing, my favorite moment was the monster’s chilling final line, “We belong dead.”