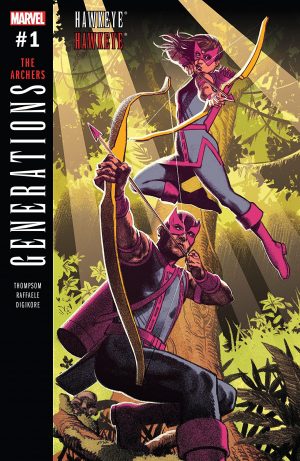 Generations Hawkeye and Hawkeye #1 has a Silver Age plot (Think a more archery-centric Secret Wars or Contest of Champions.)  and modern sense of sass. It also connects to main Kate Bishop starring Hawkeye title paving away for a Clint Barton guest appearance a few months down the road. Honestly, it’s worth buying for the sight of Kate trying on the classic purple “H” alone and then getting snarked at by Clint about her “hip holes”. Writer Kelly Thompson, artist Steffano Raffaele, and colorist Digikore tell the story of Kate Bishop getting stranded on a mysterious, out of space and time island where she runs into a 1960s-era Clint Barton, who doesn’t know the word “asshat”, the villain Bullseye, and her. He is in the middle of a kind of Hunger Games contest to pick the best archer in the Marvel Universe, but most of the archers are villains and are killing each other.

Kate Bishop’s amazing sarcasm and genre savviness as reflected in Thompson’s writing makes her the perfect POV character for this kind of outlandish Crisis on Infinite Quivers type storyline. Raffaele isn’t too shabby in the art department excelling about both silly reaction shots of Kate trying not to get Clint to kill her in the beginning by pretending to be the new superhero “Hawkess” to use tight grids and cool silhouettes for hand to hand battles against Taskmaster, Crossfire, Boomerang, and other ranged weapon wielding baddies. The colorists at Digikore Studios don’t go too fancy with their palette going with a bleak green that reminded me of the island flashbacks in Arrow and pouring on the purple on Clint’s classic costume.

Kelly Thompson really understands the goofy mentor/cool apprentice dynamic of Clint and Kate as seen in Matt Fraction and David Aja’s Hawkeye, and I’m really excited to see her explore it for real in an upcoming arc of Hawkeye. But, in this reality, Hawkeye is a rookie-ish hero, and there is a more twisted mentor/apprentice relationship between him and Swordsman, who taught him to shoot a bow in his circus day and is behind the whole island archery contest teleporting belt shindig that is this issue’s plot. Through narrative captions and a touching monologue cut off by the hilarious sight of Clint snoring through it all, Kate realizes how she lucky she was to have a good, non-manipulative guy to train her to be a superhero and archer. (She gives Clint a few pointers this issue that pays off in the big Bullseye fight scene.) As seen in recent issues of Hawkeye, she is also dealing with a supervillain dad of her own and sees Clint going through a similar experience where he struggles with either taking out Swordsman or using him as additional muscle against the other bad guys. The great rapport between the Hawkeyes doesn’t just come from compatible banter styles, trick heroes, and a shared love of Pizza Dog, but also through similar experiences in their pasts.

Generations Hawkeye and Hawkeye #1 has all the one-liners and quips about time travel and archery techniques that your heart could desire plus a cinematic battle between the Hawkeyes and Bullseye with a kind of, sort of assist from Swordsman and his new apprentice, Eden, who is a little on the overpowered side. It’s a buddy action comedy with a heart of pure gold and pure snark from Kelly Thompson, Steffano Rafaele, and Digikore.

Overall Rating: 7 (out of 7)- Generations Hawkeye and Hawkeye #1 is a damn fun team-up with a crazy premise and a great sense of humor that gets to the core of Clint and Kate’s (Never Katie.) relationship.