My first day at Gamescom has come to an end, and it‘s probably high time to tell you about some of the cool and/or interesting things that I have seen. 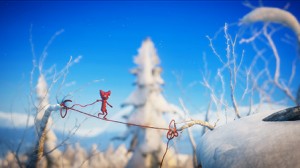 Unravel so far has probably been my favorite game at the show. I got to play a really long demo of it. Even within the 30 minutes of time I have spent with it, I wasn’t able to finish it. The first thing you notice while playing it just how damn cute the whole thing is. Yarny starts his adventure in the wilderness of Sweden by being a ball of yarn that was lost by an old lady. As soon as you take control of him you notice how he looks around checking everything out, because this world is so new to him. But there are also alot of other cute reactions of him during his adventure. Gameplay wise Unravel is a physics based puzzle-platformer. Don’t be alarmed by this, the controls are definitely more responsive than Little Big Planet. Besides the basic movement and being able to grab stuff, Yarny can also use his own yarn to throw a lasso. That way he can swing around or pull things from a distance. He is also able to tie knots. This way you can create yarn trampolines to reach higher places. The lines though can also be used as a platfrom for objects to put on. Near the end of my demo I had to use these lines to move a buoy up and to a different part of the level while the tide was moving it. That ended up being way harder than I expected and sadly I got stuck there. Overall though, Unravel seems to be shaping up to be a wonderful game.

I got to try out the new mode for Battlefront that was just announced called Fighter Squadron. I feared it would be similar to Air Domination in Battlefield 4. That was just team deathmatch with jets and didn’t really end up being that interesting. Here you still have this component, but beyond just having a fight between TIEs and X-Wings  there are also objectives to take care of. On the map I got to play, a rebel transporter showed up from time to time. As an Imperial pilot, I had to take it down, while the rebels tried to protect. If either team succeded it granted them a big points bonus. The fighters are also way easier to control than the Battlefield jets and it was immediately fun to zip around in them. You steer them with the right stick, while you control the speed with the left one. Every craft is also able to do loops and rolls by just pressing in the corresponding direction on the d-pad. Beyond that there were specific special abilities each fighter had. Both had homing missles, but the X-Wing was also able to shield itself, while the TIE had a turbo boost. Overall an enjoyable mode that will probably find a decent amount of play time next to the main mission based one. 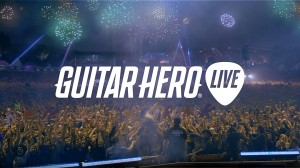 I didn’t expect to like Guitar Hero Live as much as I did, so that was kind of a nice surprise. In the end while you play you barely even notice the FMV stuff in the background, so despite beeing cheesy it didn’t distract from the gameplay at all. The new guitar feels very solid, I especially liked that there is now also a button on it to use your Hero Power. It still took a couple of songs to get used to the new button layout. It was weird not using four fingers and having monage two rows of three buttons each. In the end though it felt more like actually playing a guitar. Especially on the harder difficulty levels the button combinations you have to press come very close to how you do chords on a real guitar. The other cool thing was Guitar Hero TV. If the campaign songs are not your thing, there will be hundreds of songs available on different stations. The stations are themed, so you can pick for example something that only plays rock classics. This mode seems to be ideal for parties. You can just put a station on and it plays music videos, but at any point someone can just pick up a guitar, select a difficulty and immediately play, from whereever the song is at the moment. In this mode it is even possible to have someone sing. There also is no longer a way to fail, it’s all about the fun of interacting with music. To me Guitar hero TV seems like a great way to give the game longevity without ever having to buy any songs.

That’s going to be it from me for today. It’s getting late and there is more stuff to see tomorrow. Check back soon to read about some more fun stuff I got to try at Gamescom.