Wolfenstein: The Old Blood is a prequel to last year’s Wolfenstein game. Unlike what you would expect, it is not DLC but a complete standalone experience, that can even be enjoyed without knowing the New Order. It is set in 1946 and the Allies are losing the war. The technology Deathshead developed gives the Nazi just too much of an advantage. In the last title we have played the assault on Deathshead’s lair at the start of the game, so now it is to us to actually find a file so we know where it is actually located. For that we will have to get into Castle Wolfenstein. 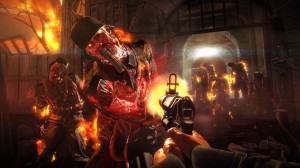 During our adventure we will get into Castle Wolfenstein, out of it and visit the city of Paderborn. While getting this file is our main objective there are some things going on at Castle Wolfenstein that need to be dealt with. While in the New Order there was no sign of anything occult that got introduced in some of the older Wolfenstein titles, this game brings the whole thing back. It’s pretty great how Machine Games acknowledges a lot of the things that happened in past games and puts their own spin on it. So by the end of this game you will know why the Nazis stopped getting into the occult and focused solely on their technology. I felt an interesting touch was devolving a bit of the technology featured in the New Order for this prequel. The shotgun in here feels like a prototype of the one you use in the New Order. The dogs are not yet robots, but instead normal dogs with metal enhancements grafted onto them. And the big heavy soldiers have to be connected to power lines to actually function. Looks like Deathshead hasn’t quite figured out the battery technology…yet. 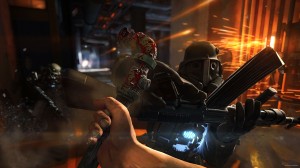 From a gameplay perspective not much has changed, they give you a new melee weapon with the pipe, which basically functions like the knife in close combat. You can also use it to climb specific parts in levels or use it to open up doors and walls. Otherwise your arsenal is basically the same just with lower tech variations. Interestingly enough, they do give you more time with the double barreled shotgun in this game. Good, because everyone knows how much fun these are in first person shooters. The two other smaller changes I have noticed are for one they take away control from the player even less than in the last game. Machine Games always said they wanted to go back to old school FPS design with Wolfenstein, but to me they were still a bit too much into the whole set piece design which also included taking away control from the player a few too many times. Absolutely not the case here. The other thing that bothered me in the New Order was the strong reliance on the big armored enemies in the second half of the game, which are basically just big bullet sponges. That bogged the fun combat a bit down.The remedied that as well and the heavies are now rarer which keeps the combat very fast paced. 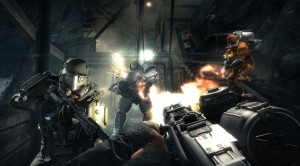 The level design in this also seems slightly improved. I feel like now large portions of the game can truly be approached in two different playstyles. Stealth and going Rambo are equally viable and fun at all times. It helps that at least once per chapter they have one big combat arena which you can approach in whichever way you want. These arena are then later unlocked as challenge maps which you can replay for high scores. A nice way to add some replayability to the 6-8 hour main campaign. They also added more nightmare levels. In the the New order you could play some Wolfenstein 3D with the mechanics of this game. In the Old Blood they now have a bed hidden somewhere in each chapter which gives you a level in that style.

Review 6 (out of 7): Overall Wolfenstein: the Old Blood is a great game for just twenty bucks. It feels like a slightly improved and condensed version of last year’s title, while still standing on it’s own. I hope we can see more games like this and I am already looking forward to whatever Machine Games does next, but let’s be honest here I hope it will be more Wolfenstein.