The Flash Season 3 Review — I Know Who You Are — Who Are You, Who Who~ 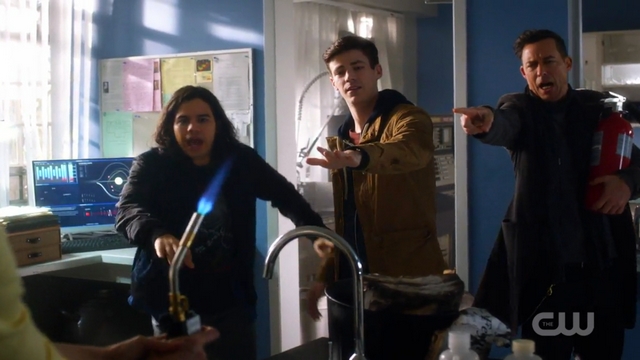 Big spoiler warning this race friends. Now our episode begins with Joe (Jessie L Martin) and Cecil doing things couples do. During the quiet time, things get a little awkward and Cecil slips that she loves Joe. Detective West’s love life is running ok at this point. However his silent reaction doesn’t instill a lot of fun at the moment. Before things can get more painfully cringey he’s summoned to Star Labs.

BA (Grant Gustin) informs the group of the physicists that will help stop Savitar. So plan the is to visit the graduate student and get her help. Julian (Tom Felton) finds some objection to this. He would rather find Caitlin (Danielle Panabaker), now Killer Frost. He loses some composure when he accuses everyone of not doing enough. Despite the fact they’ve actually spent a week or so dedicated to the task. So the most people friendly of the team head out. 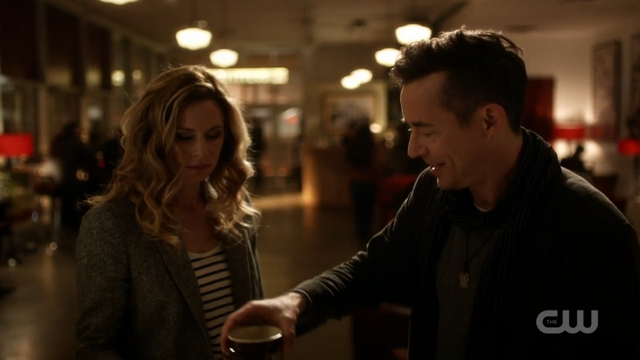 Cisco (Calors Valdes), HR (Tom Cavanagh), and Barry find themselves roaming the halls of CC university. They eventually find their lady but not the way they thought. She’s grown disenfranchised with her studies — to the point she’s burning her notes. So, apparently studies on dimensional theories doesn’t fly within the scientific community. As the guys try to convince her that her theories will have huge impacts, Killer Frost comes a knocking.

Ms. Frost tries to put the doctor on ice but Barry and a reluctant Cisco manage to escape. We then move to Central City Police department. We learn that guys have tampered with evidence. Aside from a sketch there’s not much proof point to Killer Frost attacking. At the station, Cecil comes back to try to make sense of their earlier awkwardness For an outsider preservative it’s not going all that well because Joe seems standoffish and we still don’t know why. 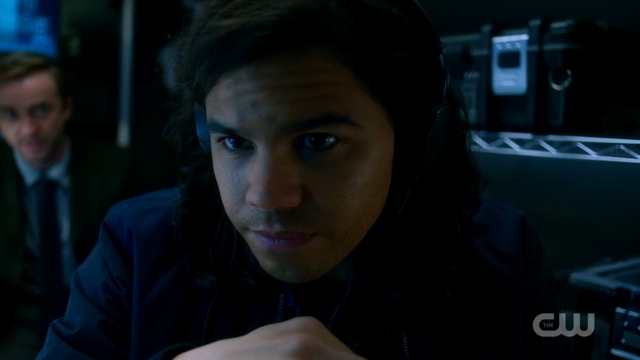 Back at Star Labs, the team readies themselves for a stakeout. Moving on the the local coffee shop, HR is now in his element. Over a cup of coffee he gains the doctor’s trust –while getting details from Cisco. As Cisco and Julian monitor HR flirt, they discuss Killer Frost. Julian points out that Mr. Ramon could shoot her back at the university. Cisco disregards the notion. Still can you shoot a friend when pressed?

Joe and Barry discuss his love life or attempt to save it. Joe speaks of how complicated things are. He seems to fall on the excuse that his Team Flash work makes dating difficult. Barry of course helps me realize that he can make it simple. Sounds like Joe’s making an excuse making considering that everyone else is able to do it. Although successful relationships is a case of your mileage may vary. 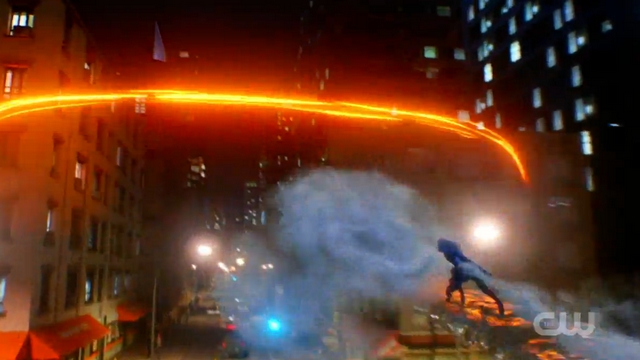 Killer Frost shows to attempt to kill the target again. As she tries to get that done Barry gives chase. He plans to lead her to Cisco to knock her out. So when he has a clear shot he can’t do it. In the process, Barry gets stabbed in the same leg with an icicle. Hey why not?

Before things can get quiet, He and Cecil have another chat because that’s what dating folks do — communicate. As she attempts to get answers for his distance, he beats her to the punch. Joe decides that it’s probably better to stop dating. Again his reason is that life is crazy and its best she stay safe. Not to play favorites but Joe is certainly deserving of having a happy relationship. If knows it or not. As the DA leaves heartbroken she’s captured by Killer Frost.

Her demands are simple. If he wants Cecil to leave the team needs to deliver the doctor to her. 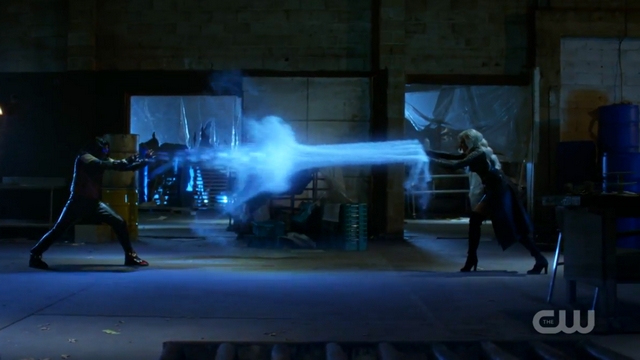 During this time, Julian later on confronts Cisco demanding answers. Why could he not attack Frost? The simple answer is that he’s afraid of doing more than knock her out. His fear is legitimate, Vibe can kill people if he intended to do so. However Julian instill in Cisco that that’s not something he should fear. A man of his caliber isn’t someone to lose control and harm others.

The Scarlet Speedster and Joe get ready to launch the plan. Barry pleas with Killer Frost but she mocks him. THings get weird however. She begins quoting Barry word for word. She’s not psychic so how is she doing that? She even acknowledges that Vibe is lying in wait. She attempts to kill him as he vibes away. It was said Savitar knows the future but this is very intricate information. Losing the moment of surprise, they find themselves under fire from Killer Frost. 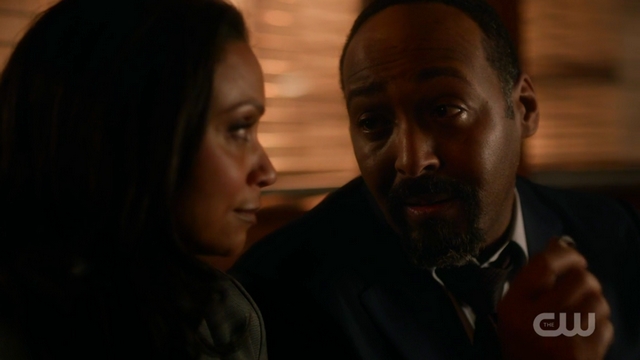 Eventually the team is able to free Cecil and it’s Vibe vs Killer Frost. Unlike his future self he’s actually able to best her in their show of clashing powers. He’s able to retrieve some of her blood but before anyone can get to her, Savitar stops them and hides her.

Joe speaking with Cecil thanks the universe. He then begins to explain how crazy things are and that he needs here. He then shares that he loves her he recognize how foolish he’s been. He decides to tell her the truth. 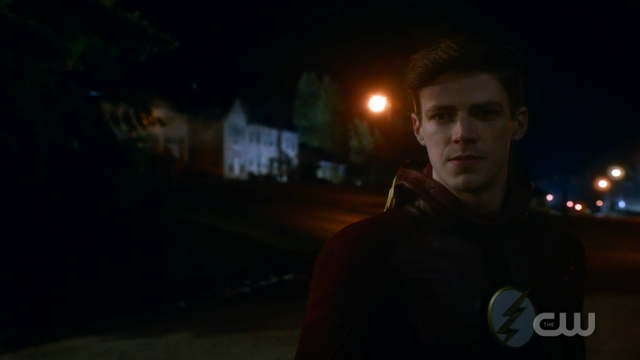 After the win, things get better. With Killer Frost’s blood sample, the Team hopes to return Cait to normal. The doctor back at the lab discusses her theory wit the speed force. She then makes note that Savitar may need his suit because his life would be in danger without it. At the same time unbeknownst to her she manages to avoid HR’s feelings. He likes to think he has a way with the ladies.

At the end of it all, we return to the West home as Joe arrives. He informs everyone that he’s told Cecil everything. So now she’s up to speed with the The Flash. Detective West talks of how love is a matter of letting  that person know everything. Joe’s words begin to stir within Barry. Then all the details of Savitar his knowledge, his actions, and speeches resonates in his mind. 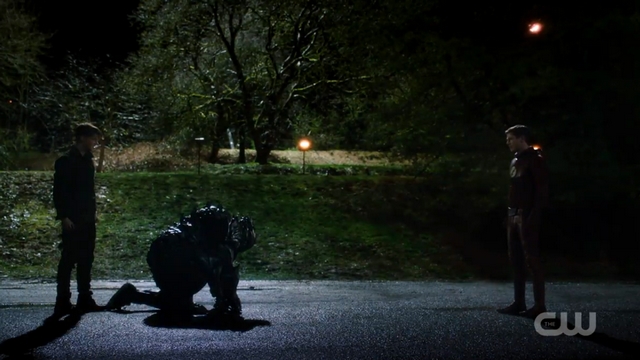 Barry excuses himself for the family. He then runs half way across Central City to call out the villain. Savitar then greets him on the empty street. The scene gets more palpable as Barry begins to connect the dots of whom Savitar is. Barry understands that all those intimate details he possess isn’t a matter of know the future. Savitar has lived these memories that Barry shares and thus he knows his identity. The man that exits the suit is in fact a disfigured Barry Allen. Like the god of speed said months ago; he is the Future Flash. One of the best reveals as our episode closes.

This was a very well done episode mainly due to the connecting subplots. Killer Frost was actively dangerous. HR was at work. We then learn Savitar's identity in the last 5 minutes in grand fashion.